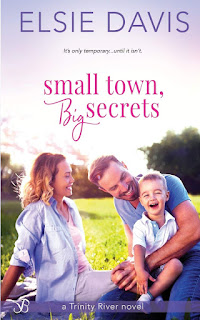 To save her son, shy but determined waitress Becky McAllister would do just about anything. But she never expected “anything” to include the brother of the man who broke her heart.Steve Parker needs a wife, now, if he has any hopes of winning his local DA election and becoming the advocate for the underserved he’s always dreamed of being. The sweet waitress seems like just the person—if he can get her to agree.One year of marriage—no strings, no personal attachments. Becky gets the insurance funds she needs for her son’s surgery while Steve’s poll ratings soar. Neither planned on a commitment in their future, so they should have no problem making it through the year without getting emotionally involved, right?Except Becky’s holding on to a secret from her past—one that would change everything.

Marriage of Convenience is one of my favorite historical romance tropes but one that rarely works for me in contemporary. This one works, not so much because of circumstances but due to the characters themselves. Becky's sweet little boy needs surgery and she is truly out of options. She's a good mom, raising her son on her own and doing the best she can while also helping her mother and younger sister. Then there's Steve who is being pressured by his campaign manager to present a happily married candidate to voters in order to win the election he needs to help underserved mothers. He really is a good guy, with his heart, and priorities, in the right place.

I enjoyed Becky and Steve. The chemistry between them is immediately apparent, and I found myself rooting for them from the get-go, but what I most enjoyed was the solid friendship they formed before allowing deeper feelings to enter the picture. Steve's relationship with Byron, Becky's young son is so sweet. I loved that he fell just as hard for Byron as he did for his mom. But, there are some significant obstacles in their path to happiness.

I appreciated that the author didn't make this a triangle story and instead focused on the primary couple. From the beginning, Steve was on Becky's side, even after he discovered the secret she's been forced to keep. I loved how he stood up for her, and with her, even when she made it difficult to do so, and how they discovered, together, what was most important in their lives.

One aspect of the story that I had a hard time believing was the change of attitude from Steve's family in the Epilogue. I can understand the author wanting to tie everything up with a nice, happily-ever-after bow but to ask me to believe the abrupt turnaround from people who were truly horrible throughout most of the book was a stretch. That aside, however, I finished the book confident that Steve, Becky, and their family were headed for a life of love, happiness, and no secrets, in their small town.

Posted by pjpuppymom at 7:26 AM