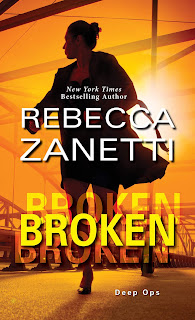 Dangerous: Former Navy SEAL Clarence Wolfe’s unit was taken out with a land mine. Injured and devastated, he hasn’t been quite right since. Worse, the tragedy was no accident. All Wolfe wants now is to take down the man responsible. In the meantime, he’s good with being the muscle for the Deep Ops team—and leading a steamy no-strings-attached personal life. Until one intriguing woman changes everything . . . Determined:  Reporter Dana Mulberry is on a mission to avenge the death of a fellow journalist. She’s finally hot on a trail—right to a sex club—where she runs into . . . Wolfe? It seems both their leads have led to the same spot. To keep from blowing their covers, they’ll have to at least pretend to have a little fun. Trouble is, they genuinely like each other. And that’s way too risky for Wolfe, especially when, to his surprise, Dana agrees . . . Complicated:  Drawn to each other in ways they can’t understand, Wolfe and Dana keep it professional—until they’re shot at one night. And when their adventures land them both at the heart of corruption in D.C.—and at odds in their missions—they’ll have to dig deeper than ever to succeed in their quests—and with each other . . .
PJ's Thoughts:
I'm new to Rebecca Zanetti's books. I know, where have I been??? After being introduced to Wolfe and Roscoe in Zanetti's novella in the PIVOT anthology, I was beyond excited for his story and, wow, did it ever deliver. Filled with set-the-sheets-on-fire passion, breath-stealing danger, edge-of-your-seat suspense, surprising sweetness, a truly evil villain, and hilarious humor (take it from me, you don't want to be drinking anything while reading the wedding weekend scenes), this book had everything I could have wanted...and then some.I adored Wolfe. He's such a fascinating mix of contradictions, an alpha male with deadly skills and a take-charge attitude but with an underlying sweetness and vulnerability, a health nut who savors his morning latte with whipped cream and sprinkles. He truly has been a lone wolf, it's hard for him to ask for help, and he doesn't let people get close to him. Yet, on the other hand, he carries a tiny kitten in his pocket. He does care for people in his own way but it's not until he finally connects with Dana that he begins to open his heart.Dana is the perfect match for Wolfe. She challenges him at every turn while also opening his eyes and heart to all that life has to offer. She's the type of person I'd enjoy having as a friend. I liked her determination, her strength of character, and her dedication to bringing the person responsible for her friend's murder to justice. I loved her family and the fun-loving, mischievous side of Dana that they reveal. In fact, I'd love to see more of her family.I jumped into the series with Broken and I think readers could do that without feeling any confusion. However, after reading this book and meeting characters from earlier in the series, I immediately downloaded books one and two and will be reading them as well. I have a feeling they will give me an even greater appreciation for all the members of the Deep Ops team, including Wolfe and Dana. Also, reading the entire series gives me more time with the craziest, funniest dog I think I've ever met in my fictional journeys. Roscoe is definitely one of a kind and I am here for each and every moment of his time on the page. Jack Daniels and red high heels. That's all I'm saying.
Posted by pjpuppymom at 12:30 AM