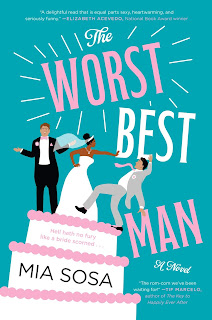 A wedding planner left at the altar? Yeah, the irony isn’t lost on Carolina Santos, either. But despite that embarrassing blip from her past, Lina’s offered an opportunity that could change her life. There’s just one hitch… she has to collaborate with the best (make that worst) man from her own failed nuptials.
Marketing expert Max Hartley is determined to make his mark with a coveted hotel client looking to expand its brand. Then he learns he’ll be working with his brother’s whip-smart, stunning—absolutely off-limits—ex-fiancée. And she loathes him.
If they can nail their presentation without killing each other, they’ll both come out ahead. Except Max has been public enemy number one ever since he encouraged his brother to jilt the bride, and Lina’s ready to dish out a little payback of her own.
Soon Lina and Max discover animosity may not be the only emotion creating sparks between them. Still, this star-crossed couple can never be more than temporary playmates because Lina isn’t interested in falling in love and Max refuses to play runner-up to his brother ever again...

Santa says:
The Worst Best Man by Mia Sosa was just what this reader needed. This 5 star book ticked all the boxes that make a great romance. Lina is a gorgeous, strong, slightly vulnerable heroine. Max is a gorgeous, strong, slightly vulnerable hero. Enemies to lovers. Heroine has a wonderful, loving, supportive family around her. Hero has a family that is, shall we say, challenging. Having this mix had me crying, laughing and, at times, ready to take off my earrings to do battle for my prima - my cousin.

We are introduced to Max when he awakens to learn - via text - that his brother Andrew has decided, based on his advice, that he is not ready to marry Lina. It falls to Max to let her know Andrew is not going to marry her.

For Lina - it’s bad enough to be left waiting at the altar - but as an up and coming wedding planner - it is beyond humiliating. One could say she would plan for brides and never be one herself. She kicks Max out of her suite and turns to her cousins to rally around her to do damage control.

Fast forward three years and Lina and her wedding planner business have caught the eye of Rebecca Cartwright, CEO of the prestigious Cartwright Hotel Group, the DC area. She would like Lina to apply for the position of wedding planner at their flagship hotel. Lina is honored and shares her news with her assistant and cousin Jaslene. Lina is very close to her Brazilian family and they share everything. Lina is determined to be as successful as her mother and aunts who came to this country, survived divorces, and banded together to start their own business.

And so while planning her cousin Natalia’s wedding, she agrees to meet with Rebecca to see what this opportunity has to offer her. Lina welcomes the challenge of competing against another candidate in showing Rebecca her vision for the hotel group. Rebecca offers the service of her marketing group to come up with and present her vision. Enter the representatives from Atlas Communications - none other than Max and Andrew Hartley. Talk about getting the wind knocked out of you but Carolina Santos is no pushover! She recovers quickly and pretends never to have known either one of them. Rebecca then proceeds to assign Lina one of the brothers to work with on marketing her vision to the Cartwright group.

Lina is paired with Max - a slightly better choice than Andrew. She had made her peace with him years ago. Lina is determined to present her vision without any help from anyone, particularly Max. Max, eager to get out from under his brother’s shadow is equally determined to show that the successes he had outside of DC were no accident.

Can this enemies to lovers story work? Readers, are you in for a marvelous ride. Max and Lina try for the no strings attached approach and soon find that love has other plans for them. What also attracted me to the story was the fact that Lina was a first generation Brazilian American with close ties to her family who inspired and drove her to be a success. Her mother and aunts reminded me of the strong women in my own family. And the humor and the family gatherings were reminiscent of my own experiences as a first generation immigrant. Max’s family dynamic also drew me in, reflecting my husband’s more American upbringing. I also enjoyed the glimpses into Max’s friend who will be featured in Mia Sosa’s next book which I am very excited about. And who knows, maybe Andrew may turn out to be not such a monumental jerk in the future.