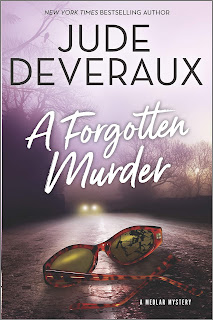 An English manor home, an unsolved mystery, too many suspects to count… It’s the perfect holiday for romance novelist Sara Medlar.

After solving two murder cases in their hometown of Lachlan, Florida, Sara Medlar, her niece Kate and their friend Jack need a change of scenery. Sara arranges for them to visit an old friend of hers in England. Upon arrival at Oxley Manor, a centuries-old estate that has been converted to a luxury hotel, Kate and Jack quickly realize that Sara is up to something. They learn that Sara has also invited a number of others to join them at Oxley.

When everyone assembles, Sara lets them know why they are there. Decades earlier, two people ran off together from Oxley and haven’t been heard from since—and Sara wants to solve the case. As the people who were there the night the two went missing, the guests find themselves cast in a live mystery-theater event.

In reenacting the events of that night, it becomes clear that everyone has something to hide and no one is safe, especially when the discovery of a body makes it clear that at least one of the people who disappeared was murdered.

Sara, Jack and Kate are once again at the heart of a mysterious case that only they are able to solve. But someone is willing to continue to kill to keep the truth about Oxley Manor buried, and none of the guests are safe.

Admittedly I’m a little biased when it comes to Jude Deveraux. I cut my romance teeth on her historicals when I was a precocious teen; and I can count on one hand the number of books by her I didn’t truly care for or “get.” I know not everyone feels the same for her--much like not everyone thinks J.K. Rowling walks on water. It takes all kinds. So for me, it’s a 5 star story. I like cozy mysteries; and I liked the And Then There Were None feel to the story, where anyone could have done it and it seems multiple people did. There was the familiar romantic pull between two of the characters, Jack and Kate, which feels like a classic Jude move. I am rooting for these two to hook up, eventually.

The third, but main sleuth, is Sara Medlar (which I love the sound of because you know, “meddler”, writers are so tongue-in-cheek, aren’t they?) who is a famous romance writer who got her start in the glorious 80s and has lots of money and is a little bored...and thus she solves some mysteries in her spare time. Sara is clearly--CLEARLY--Jude who gets to say the sort of comments about wanna-be writers, romance conferences, and people’s idea of what romance writers actually make writing books she’d love to say but doesn’t because she’s a professional, gracious author (who I’ve met at a romance conference and she was lovely.) Also, because Jude and Sara both know, people don’t listen. Anyway, if you’re a reader or writer who has some interaction within RWA, those little details will likely also entertain you.

But for the rest of you, those who are here for the story, I enjoyed that as well, truly. If you love cozy mysteries set in the land of the Cozy Mystery, the story begins at the right place: a country manor in England. The manor has just been renovated with Sara’s help--and she is visiting her friend, Bella, the owner of the home. The house comes with a history--it used to belong to an earl--but the young earl died tragically in a car accident. A tragedy itself, but added to this is a second mystery, the disappearance of two of the earl’s inner group, whom we’re unsure if they’re dead or alive. The disappearance of the first two is said to have contributed to the young earl’s death.

So Sara comes to figure out why did the two young people, Sean and Diana, disappear? Were they lovers? Were they killed? Diana was to marry the young earl. Sean was the stablehand. It seems like a classic romance trope--did they run away together and change their names? If so, why? And it’s been over twenty years, why keep hiding?

Soon Sara realizes that there is more than a disappearance. There is a murder. The body of the stablehand has been hidden in a pit; and it soon becomes clear whoever hid it is determined to make sure the truth is never found out. Sara as well as Kate (her niece) and Jack begin to unravel the clues; and Sara puts on an elaborate re-enactment murder mystery party. The other people who were friends of the earl and the two who disappeared come to the manor to relive that time and share what they know. Only it seems any one of them could have done it. But...eventually the truth surfaces. And as any writer knows, the truth is never simple.

If you like cozy mysteries and/or Jude Deveraux’s writing style, I think you will enjoy this book. I will be looking for the first two in this series, which I haven’t yet read, A WILLING MURDER and A JUSTIFIED MURDER. I didn’t need to read the other two books to understand what was going on or feel connected to the characters and their development. Enjoy!

Email ThisBlogThis!Share to TwitterShare to FacebookShare to Pinterest
Labels: Hellie