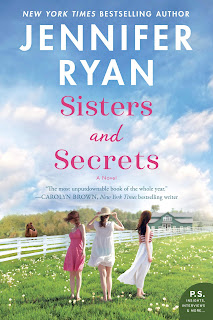 There’s nothing more complicated than the relationship among family…Especially when the Silva Sisters are keeping secrets.

For Sierra it means returning home with her two little boys after a devastating Napa wildfire takes her home, her job, and even the last mementos of her late husband, David. Determined to start over, how can she ever reveal the truth—that her husband may have led a double life?

To the world, Amy’s world is perfect: handsome husband, delightful children, an Instagram-worthy home. But behind this facade lies an awful truth: her marriage is rocky, her children resentful, her home on the verge of breaking up.

Heather, impulsive, free-spirited, and single mom to an adorable little girl, lives for the moment wearing a carefree smile. But she refuses to reveal the truth about her daughter’s father, and his identity remains a mystery even to her family.

As the Silva Sisters secrets are revealed, each realizes that there is more to their family than meets the eyes…and forgiveness may be the only way to move forward and reclaim true happiness at last.

Sisters and Secrets is a moving novel of sisterhood, second chances, and the secrets that have the power to break or bond families—and alter destinies.

PJ's Thoughts:
Man, did this book take me on a ride! One of the things I most enjoy about Jennifer Ryan is her ability to create realistic characters in whose lives I become fully invested then place them into situations that evoke my deepest emotions. She's done it again with her new women's fiction novel, Sisters and Secrets. I finished this book two weeks ago and these characters are still living in my head.
The women of the Silva family are bound by love, betrayal, heartbreak, strength, devastation, hope, forgiveness, and second chances. Ryan depicts each of them clearly, flaws and all, giving readers insight into their strengths and weaknesses, their hopes and fears, and the actions that show who they are at their core. I traveled their journeys with them, cheering at points, occasionally crying, and at other times, shaking with fury. Ryan did not allow me to be an objective bystander while reading this book. From the heart-stopping, vividly depicted opening scenes  right up until the final, hopeful sentence, I was unable to look away.
Sierra's story broke my heart but also gave me the most joy. I liked her so much and loved her relationship with Mason and their second chance at love. He's such a great guy. I enjoyed watching them explore the bonds between them that began in childhood and nurture them into a deep and abiding love. I especially enjoyed watching Mason's relationship with Sierra's boys develop and deepen over the course of the book. I'm confident this small family will have a happy life together.
Amy's character showed me the most growth during the book. I had a hard time warming up to her at first but by the end of her journey, I was firmly in her corner and happy with her situation. She worked hard for her happy ending and she deserved it.
All I'm going to say about Heather is I don't like her, I would never want to be friends with her, and I don't particularly care what happens to her. That may seem harsh but, like I said earlier, Ryan's characters evoke deep emotions. I'll let you all make up your own minds about her.
If you enjoy thought-provoking, family stories that explore the relationships between sisters, what binds them together and what has the potential to tear them apart, I highly recommend Jennifer Ryan's Sisters and Secrets.
Posted by pjpuppymom at 12:30 AM