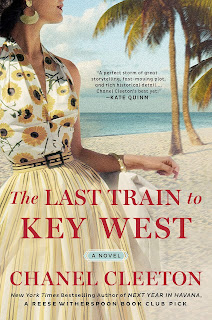 In 1935 three women are forever changed when one of the most powerful hurricanes in history barrels toward the Florida Keys. For the tourists traveling on Henry Flagler’s legendary Overseas Railroad, Labor Day weekend is an opportunity to forget the economic depression gripping the nation. But one person’s paradise can be another’s prison, and Key West-native Helen Berner yearns to escape. After the Cuban Revolution of 1933 leaves Mirta Perez’s family in a precarious position, she agrees to an arranged marriage with a notorious American. Following her wedding in Havana, Mirta arrives in the Keys on her honeymoon. While she can’t deny the growing attraction to her new husband, his illicit business interests may threaten not only her relationship, but her life. Elizabeth Preston's trip to Key West is a chance to save her once-wealthy family from their troubles after the Wall Street crash. Her quest takes her to the camps occupied by veterans of the Great War and pairs her with an unlikely ally on a treacherous hunt of his own. Over the course of the holiday weekend, the women’s paths cross unexpectedly, and the danger swirling around them is matched only by the terrifying force of the deadly storm threatening the Keys.
PJ's Thoughts:
This was my first book by Chanel Cleeton. Let's blame that on too many books, too little time. I've heard of her, of course. Seen her books on lists, been intrigued by the covers, blurbs, and reviews. But, until now, I've not yet taken the time to read one. And that was a mistake. The only thing that would have made the experience of reading The Last Train to Key West more pleasurable is if I had been actually sitting on the beach instead of imagining it while losing myself in this compelling and richly detailed story.
Cleeton's characters are well-developed and relatable, their circumstances eliciting my interest immediately. I found myself invested in them, eagerly following their compelling individual, and connected, journeys, often with my heart in my throat. They are so vividly depicted that I quickly began thinking of them as real people which, of course, raised the emotional stakes they faced even higher. I enjoyed how Cleeton told each woman's individual story while seamlessly interweaving them into and out of each other's lives, and flawlessly, and in some cases, surprisingly, interconnecting them all as they eventually face a common danger greater than any of them can possibly imagine.
Cleeton has a gift for creating a sense of time and place that immersed me in the Florida Keys of 1935. Her historical detail is rich, and well researched, enabling me to experience, through her words, the beauty of the undeveloped area, the post-Depression hopelessness, and the sinister undertones of those who would take advantage. Then, for even more compelling danger, she places her characters in the path of  the 1935 Labor Day Hurricane, one of the strongest, and deadliest, Atlantic hurricanes to ever make landfall. I don't know if this author has ever experienced a hurricane first-hand but her descriptive writing had my heart racing as fast as if I'd been right there with her terrified characters, waiting for death while praying for life.
If you haven't discovered Chanel Cleeton's novels yet, I highly recommend beginning with The Last Train to Key West. I couldn't put it down.
For the romance lovers among you, while this novel is historical fiction, there are romantic threads for Helen, Mirta, and Elizabeth and a satisfying conclusion for this reader.
Posted by pjpuppymom at 12:30 AM