Review - - A Shot Worth Taking 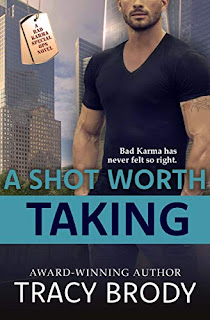 AN FBI AGENT WITH SECRETSFBI Linguist Angela Hoffman’s expertise and previous experience send her undercover on a critical operation. Only when her mission converges with the target of the Bad Karma Special Ops team, she is recognized by Tony Vincenti. A joint task force is formed to track a dangerous terrorist, and, as they work together again, Angela’s prior attraction to Tony escalates. Only her past work and betrayals eliminate any chance of her having a serious romantic relationship--even with the enigmatic soldier who makes her long for the kind of family she never had.AN ELITE SOLDIER WANTING TRUSTUndercover operations are Sergeant First Class Tony Vincenti’s specialty. He previously played Angela’s lover. This time, he’s hoping after they wrap this mission to see what can happen between them for real. However, when they learn of a potential attack, all hopes for a romantic interlude are put on hold while they race to find the target of a dirty bomb.A FUTURE WORTH RISKING EVERYTHING FORTony is certain Angela is everything he wants in a woman, but first he has to earn her trust and convince her that, despite her past, they can have a future. When Angela’s fears become reality and she’s targeted by a deadly threat, she has to trust him with her secrets so he can protect her life. But will that trust run deep enough to convince her once and for all he’s a shot worth taking?

Military romantic suspense is one of my favorite romance categories and Tracy Brody is a new author I'm enjoying. Brody combines well-developed characters with sizzling romance, edge-of-your-seat danger, snappy banter, and realistic suspense, then wraps it all up within a well-researched military unit. It's clear she's taken the time to do this sub-genre justice.

I enjoyed Tony and Angela's romance. These are two well-matched individuals with a whole lot of sexual chemistry. But, more than that, they like one another, respect each other's abilities, and are good teammates, on and off the job. Still, I sure did love that chemistry. Brody is very good at building sexual tension.

Brody is also good at building other types of tension and there's plenty to go around in this book. From terrorist bombs, to an attempt on Angela's life, to secret missions abroad, there was plenty of danger and potential chaos to keep me flipping pages.

If you enjoy military romantic suspense with interesting characters and life or death consequences, give A Shot Worth Taking a try. It's the third story in the Bad Karma Special Ops series but stands well on its own. You will, however, meet several characters from the first two books and I recommend those stories as well. Desperate Choices (a 128-page extended length novella), introduces the series and tells Bad Karma leader, Ray Lundgren's story while the first full-length novel, Deadly Aim, introduces the entire team and tells the story of Spec Ops sniper, Mack Hanlon and Black Hawk pilot, Kristie Donovan. That one kept me reading way into the night.