Review - - Strong From the Heart 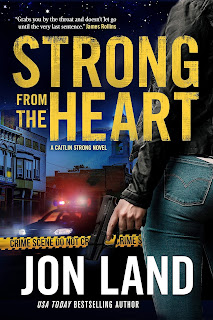 Strong delivers the same twisty plot, action, and character growth that have become hallmarks of the series. Land has a knack for crafting stories that play on issues of the time, such as the dangers of new 5G technology or, in this book, the opioid epidemic.
What keeps me reading the series, however, is not the great plotting but the characters. I picked up the first book, Strong Enough to Die, because I was intrigued by the title first and then by the blurb. In that book, Caitlin is a former ranger still struggling to come to terms with the end of her career. Her marriage isn’t in great shape, either. Her husband is back from the Middle East with amnesia, and things weren’t good between them when he left. As though she didn’t have enough trouble, former mob enforcer and ex-soldier Cort Wesley Masters has just been released from prison and is looking for Caitlin. He has committed more than enough criminal acts to justify far more time than he served, but he did not commit the crime for which she arrested him. He wants a word with her about that.
Cort Wesley finds Caitlin in the middle of a potentially lethal problem. The situation goes downhill from there, but they come out of it as reluctant allies. While that may seem highly improbable, Land has a knack for pulling off the enemies-to-allies-to-more trope. He has also written a series about a Shin Bet (the Israeli equivalent of the FBI) agent and a Palestinian-American detective. He finds commonality between disparate characters that makes their dynamic work.
Caitlin’s relationship with Cort Wesley develops slowly and must take into account his two sons by a deceased former lover. Through the series, Caitlin and Cort Wesley work to define and solidify their relationship as they and his sons gradually forge a family. By Strong From the Heart, the family bond is firmly established, but they face problems common to families everywhere. They must deal with those while confronting the larger threat of the main plot. If you don’t like series with continuing characters, this may not be for you. If you do, however, you may find this process as appealing as I do.
Ongoing supporting characters include Caitlin’s Texas Rangers captain and other rangers, the ghost of Cort Wesley’s deceased cellmate, and a former Venezuelan secret police operative who set out to kill Caitlin and instead, in part because he’s prone to self-examination and philosophy, has become part of her team.
Strong From the Heart opens with a mailman wandering the Texas desert, seemingly unaware of his surroundings. Agents from ICE intercept him. Tracing his straight-line path backward, they discover a small town where everyone is dead. They cordon off the area and assemble personnel to investigate. Caitlin Strong is the Texas Rangers’ liaison to the Department of Homeland Security (DHS), so her captain sends her to join the investigation.
While Caitlin searches for the cause of this catastrophe, the opioid crisis hits home. One of Cort Wesley’s sons overdoses on Oxycontin and nearly dies. This sets Cort Wesley on a mission to shut off the drug supply that nearly killed his son.
Both Cort Wesley and Caitlin are up against powerful figures whose wealth insulates them from consequences. They live in the shadows and intend to rule from there. The pills they’re making and selling will generate even more wealth, and the sudden death of an entire town spurs them to think on a bigger scale by weaponizing a deadly product.
As the two investigations gradually become one, they turn up the heat on those responsible, who retaliate. After a confrontation with Caitlin, the pill pushers’ enforcer decides to take revenge in a very personal way. My one problem with the book, a small one, was that I wasn’t entirely sure the resolution of this situation was believable. I can’t say more without spoiling it.
Caitlin’s half sister, Nola Delgado, steps in to help Caitlin and Cort Wesley. The role she plays in the story and her connection to Caitlin, who didn’t know she existed until after their father’s death, is an interesting one. Where Caitlin goes for her gun only when she has no alternative, Nola revels in killing. In fact, she’s a professional assassin. Land uses her as a mirror for what Caitlin might otherwise have been and a warning of what Caitlin doesn’t want to become. At the same time, they struggle to determine how much of a relationship and how much similarity shared blood creates.
Also woven through the story, as usual, is a case handled by one of Caitlin’s Texas Ranger ancestors. This one involves Pancho Villa and Texas history and ties into the present case in a surprising way.
Obviously, this is a thriller, not a romance. But it’s a thriller with family woven through it. There’s also explosive action and a twisty plot.
Strong From the Heart stands alone but reading the earlier books, as with many thriller series, provides layers and shading to the characters.
Highly recommended. 5 stars
~Nancy
Posted by pjpuppymom at 12:30 AM