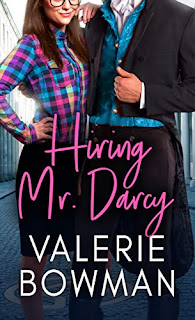 She’s hiring…
Meg Knightley is a history professor with a little OCD and a lot of love for Pride and Prejudice. When her similarly nerdy history professor boyfriend tosses her over for a starlet on the eve of the Jane Austen Festival and Games, she needs a new Mr. Darcy ASAP.He’s the man for the job…Jeremy Remington left a lucrative tech job to follow his dreams—but getting his custom woodworking business off the ground isn’t cheap. When his best friend’s sister offers good money for little more than acting the gentleman, he jumps at the chance. After all, how hard could it be to fly over to England and wear a cravat for a few days?Until things get real.She hired him to play the part of a proper gentleman, so why can’t she stop thinking about what’s underneath his waistcoat?And when Meg finds out Jeremy has had a crush on her for years, will the job turn into a permanent gig?
PJ's Thoughts:
Historical romance author Valerie Bowman brings all the wit and charm for which she's known to her first contemporary romance. It's humorous and heartwarming, with a nod to Bowman's historical roots and a truly swoon-worthy romance. Though it does take a while to get to that romance part.
Bowman's characters are fully formed, with surprising depths, and intriguing lives. It took me a while to warm up to Meg. She's rather judgmental and dismissive at first of anyone she believes is inferior to her intellect and academic achievement. As her brother so succinctly puts it, she's a snob. She's also much too tightly tied to her life checklist. But then there's Jeremy and he makes everything worthwhile. I absolutely adored him and the fact that he's had a hidden crush on Meg for years is just too delicious. He lures Meg out of her academic bubble and shows her what life on "the outside" can be when you follow your heart.
As a bonus, Bowman takes readers behind the scenes of her Jane Austen Festival and Games and the cosplay participants who are very serious - sometimes humorously so - about their craft. Let's just say the competition is a bit fierce. 😉
If you've enjoyed the witty banter and charm of Valerie Bowman's historical romances, I recommend giving Hiring Mr. Darcy a try. If you're new to her writing, this is a great place to start. I don't know if Bowman has any more contemporary romances hidden under her bed but if she does, I hope she plans to publish them because I am definitely here for them.
Posted by pjpuppymom at 12:30 AM