Tour Review - - A Tail for Two 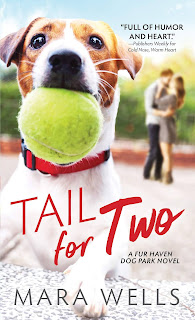 Carrie Burns has a successful business, a young son, Oliver, and an energetic Jack Russell terrier. She doesn't have time in her busy schedule for her ex-husband and his talk of working together again. But when she runs into Lance in the dog park, their lives are turned upside down.

Lance Donovan wants to promote his fledgling construction company by helping his brother Caleb with a big condo conversion. Lance even knows the perfect interior designer to make this project a success—his ex-wife, Carrie. But after a fateful meeting at the dog park, Lance finds himself not only petsitting both his brother's dog and the beloved Jack Russell terrier he had to leave behind in the divorce, but babysitting a young son he never knew he had while his ex-wife tries to get back into dating. How did life get this crazy?

Lance is determined to win back the love he thought he'd lost—but he's going to need a lot of help from his furry friends.

A Tale for Two by Mara Wells is a five out five star second chance romance! This is Mara Wells’ second book following the loves and lives of the delicious Donovan brothers. Having not read the first book in that series, it clearly stands on its own. The book really carries a delightful punch with a building that needs some love, two dogs who ratchet up the scamp quota and a blast from one of the Donovan brothers’ past.

This is Lance Donovan’s story following his bitter divorce from his wife, Carrie. Lance still did not understand how they went from passionately in love to passionately in disdain. Carrie wonders the same as she swipes through dating apps and keeping up with the demands of her interior design company.

Working with his brothers Caleb and Knox at their new construction company has helped Lance move on. They are currently working on rehabilitating and updating The Dorothy. It's early days to determine if it was a good idea to work together but their youngest brother, Caleb, has enough positivity for all three. Caleb is also about to marry the love of his life, Riley - so that happiness spills out onto everything.

In an effort to get the building into shape without putting out the senior residents of the building, Caleb and Riley test run a small honeymoon cruise with some of the residents. Lance agrees to watch their poodle Lou Lou. A trip to the dog park brings a chance encounter with a terrier who looks remarkably like Beckham the dog Carrie ‘won’ in the divorce, Carrie herself, and a sticky-handed toddler named Oliver. It turns out both the dog and the little boy are his. Needless to say, there is a lot of talking and listening that needs to happen. Two things they were not very good at when they were married.

How can two people who came so far apart ever come back together again? Lance and Carrie begin a journey of rediscovering who they as individuals, parents and as a couple. I loved this book for the sharing in their journey to finding an everlasting love. Go out and get yourself a copy. I intend to read the first book that follows Caleb and Riley’s story. And I’ve already pre-ordered the book that follows their older brother Knox’s story. That is how good I find Mara Wells’ story telling!