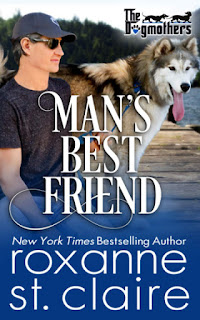 Declan Mahoney and Evie Hewitt are childhood best friends who become young lovers on one summer night in the Carolina mountains. But the next morning, they learn Declan’s firefighter father has been killed while saving Evie’s family and home. Consumed by grief, and determined to take up his responsibility as the oldest Mahoney sibling, Declan turns from Evie. That heartbreak sends her running halfway across the state, rarely seeing Declan over the next twenty years. But when Evie comes back to Bitter Bark, a couple of meddling grannies who call themselves the Dogmothers hatch their plan to rekindle this romance. They arrange a "chance" meeting and plant some surprises along the way.

When she sees Declan, Evie is knocked over by emotions for the firefighter who might just be the reason she’s forty, childless, and dedicated to her career. She’s also nearly knocked over by the Husky-Malamute mix at his side. With an unexpected assist from a dog who’d been surrendered at the fire station, Declan decides he can’t miss this chance to reconnect with the woman he’s never forgotten. It doesn’t take long for old feelings to burn hot…and it doesn’t take long for Evie, a veterinary neurologist, to notice something's not quite right with the gorgeous dog Declan’s about to put up for adoption.

As they work together to help Judah, more than one creature is healed. Evie starts to demolish the walls grief had raised around Declan’s heart, and he reawakens her dreams of marriage and motherhood. But as they fall back into each other’s arms, Declan discovers the truth about his father’s death, and that revelation threatens more than their love…it could threaten their lives. Will Evie and Declan’s dreams be destroyed by tragedy? Or can they finally let go of the past so they can take hold of the future…together?

Roxanne St. Claire writes directly to the heart with characters and stories that have never failed to capture mine. Evie and Declan are one of those couples you know are meant for one another. For the past twenty years, they've led good, productive, separate lives but something has always been missing. Happiness has never been quite complete. Now, at forty and forty-one, with experience and wisdom on their side, they're given another chance to reach for the happy ending that eluded them so many years ago and I was with them every step of the way.

St. Claire knows how to engage my emotions better than almost any other author writing today. In Man's Best Friend, she's created layered main characters with a complicated history, rich (and frequently humorous) family dynamics, an emotional mystery, and a scene-stealing, heart-stealing dog who saves the day in more ways than one. All combined to pull me into their deeply emotional story and keep me eagerly reading from beginning to end.

Whether you're new to the series or have been reading since the beginning, Declan, Evie, and Judah will pull you into their lives and capture your heart. I highly recommend Man's Best Friend.