Review - - Road Out of Winter 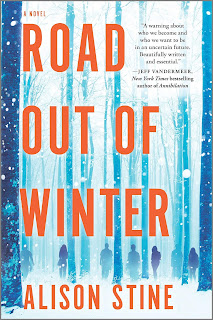 When the ARC for Alison Stine’s Road Out of Winter dropped onto my Kindle, I was excited to read it. I love post-apocalyptic fiction, though I stay away from works that have downer endings.  Unfortunately, Road Out of Winter, while it was excellent in some ways, didn’t quite live up to my expectations.

The setting is interesting and well drawn. This is a climate-disaster world caught in perpetual winter, at least in southeastern Ohio, where Wyl, the central character, lives. Spring no longer comes. Game is dying out or being hunted to extinction. Food, fuel, and other supplies are scarce. The situation is obviously untenable, but Wyl stays in the hope of hearing from her mother, who left with her lover. When a postcard arrives from her mom with a California return address, Wyl decides to set out and find her parent. At this point, the story becomes a road book and examines the ways of the people Wyl and her traveling companions meet along the way have chosen to cope with the situation.

Stine describes the people and the setting beautifully. For example:

“Everyone looked gray as overwashed clothes, exhausted and faded, their eyes turning up at the shelves as if they held the answers.”

“That was the other thing I felt, standing in the doorway of Grayson’s house: a cold so sharp it cut me. A chest-hurting cold, cold that made it hard to breathe. That meant the heat hadn’t been for a long time. Cold had crept into the folds of the drapes, into the cracks on the floor.”

“The trees shone silver with frost, like they had been shellacked, like the snow globes Mama and I made one winter for presents…Glitter snowed on the miniature world, and it was pretty, safe, to look at the fake cold, contained behind the glass.”

While the pace is generally good, the passage of several months in the opening chapter without scene breaks between month shifts was hard for me to deal with. The inclusion of several lengthy flashbacks in the middle of dialogue also hurt the pace. Overall, though, the story moved well.

I liked the protagonists here. Wyl offers a lot to root for. Abandoned by her mother and her mom’s marijuana-growing partner, Wyl tries keeps the pot business going in the basement of the farmhouse where they lived. She has one close friend, a girl who’s a member of a restrictive religious sect known only as the Church, and their mutual loyalty remains important to Wyl even after they part ways. When Wyl sees someone in trouble, she reaches out to help, and therein lies part of my problem with this book.

One of the things I enjoy about post-apocalyptic fiction is the effort to rebuild a society. This process often starts with creating a small, trusted group. Successfully forming the group depends on the main character’s criteria for deciding correctly who is trustworthy and merits inclusion. That process gets short shrift in Road Out of Winter.

When Wyl meets an injured stranger, she not only takes him to the clinic in town but takes him under her wing. Then she brings him back to her home. Why? Second thoughts after are well and good, but I missed the situational analysis any woman living alone would make up front. A similar situation occurs with a man she rescues from a riot. Although she doesn’t know who he is, and despite the riot, she dives in to rescue him. She thinks at one point that a character can’t go with her to find her mom. She won’t take him. A few pages later, she decides to take him because she doesn’t want to travel alone. I would’ve liked to see some transition in her thinking.

People’s choices to leave her group are similarly abrupt. There’s no foreshadowing, and then the person announces they’re not going on with the group.

Despite being beautifully described, the winter landscape posed another problem for me. No one knows how far south the perpetual winter extends, though California is supposedly free of it. Yet no one worries about how people are going to survive if spring never comes again. On the road, discussing whether to stay in a particular spot, no one brings up the subject of how people will eat when the supplies on hand run out.

The biggest problem I had with the book was the ending. I expect post-apocalyptic fiction to reach a resolution derived from the protagonist’s choices and efforts. That includes full awareness of the upsides and downsides of those choices, especially the final one. I don’t find it satisfying when the character assumes she’ll be okay among people she hasn’t seen and knows nothing about.

The things that bothered me about the book might not bother other readers, so I’ve tried to set them out so people can judge for themselves. I would have finished the book even if I hadn’t committed to reviewing it because the characters are engaging, the world is beautifully sketched, and the situation is interesting.