Nancy Northcott, Jeanne Adams and friends are back with another anthology set in magnificent Caynham Castle. While last year's Christmas at Caynham Castle treated readers to Christmas holiday revelry, this year's Trick or Treat at Caynham Castle immerses characters - and readers - into the spookiness of Halloween. Jeanne and Nancy join us today to give us a behind the scenes tour of the making of this ancient castle on England's Welsh border. Come to western England’s Welsh Marches and the wickedly, spookily fun Halloween Ball at Caynham Castle. Let the Earl of Caynham and his fiancée welcome you into Halloween fun.Lovers from Cape May, New Jersey, take a Halloween holiday at the magnificent Caynham Castle in Secrets and Ciphers. As their love and trust deepens, they also stumble across and solve a 700 year old mystery! Enjoy this M/M Romance with Morgan Brice’s Erik and Ben from Treasure Trail.Follow an archeologist witch from Idaho as she tangles with a sexy photographer from the witchiest town in America, Jeanne Adams’s Haven Harbor, Massachusetts. In Trouble Under the Tower, they discover a hidden chapel, fend off thieves, and help put a dark entity to rest. Somewhere in all that trouble, love sneaks in!In Mr. Never Again, spies from Nancy Northcott’s Arachnid Agency come to Caynham Castle to guard a weapons designer and her family. When her son goes missing, her loyalty may be at risk. Hunting for him offers Blaine and Dana a second chance at love if they’re brave enough to take it.In Caren Crane’s tale, Murky Waters, a landscape architect from Massachusetts finds much more than he expects, both in a floral designer from his friend’s shop, and in the woods south of Caynham Castle. Discovery of an evil waterborne spirit threatens the new love he has found, unless his lover figures out how to set him free.Four spooky, witchy, spirit-filled stories set against the stunning background of Caynham Castle’s epic Halloween Ball and Bonfire Night!

Thanks for having us, PJ, and hi to everybody!

We’ve had great fun playing in our imaginary castle with our buddies Caren Crane, Seressia Glass, Donna MacMeans, Gail Z. Martin (a/k/a Morgan Brice), and Anna Sugden. All of us wrote novellas for last year’s Christmas at Caynham Castle. This year, we also have a Halloween anthology, Trick or Treat at Caynham Castle. Only Caren, and Gail, wearing her Morgan Brice hat, Jeanne, and Nancy had room in our schedules for Halloween, so we’re the only ones in this anthology.

Creating the castle was a fun process too. It involved lots of back-and-forth, tailoring the place to the story needs. As we launch the Halloween anthology, we thought readers might enjoy a look behind the scenes of the castle’s birth.

Nancy: At the Rust City reader event a couple of years ago, I saw a book on Amazon featuring holiday stories in a common location. I love holiday anthologies and have read many centered around events like balls or fairs or house parties. The common location, though, clicked with me in a way the others hadn’t. I don’t know any romance readers who don’t love castles, including me, so I naturally thought of a castle.

Since Caren and Donna were also at that conference, I floated the idea by them. They were up for that. I also reached out to other writers whose work I enjoy. We ended up with a great group. Jeanne, being Jeanne, immediately offered to do maps and diagrams.

Jeanne: It’s the former designer/draftsperson in me, Nancy! (Also because I’m a glutton for punishment.) Like Nancy, I adore castles, and the chance to literally create the design for this castle? That was too much fun to resist. Besides, we needed a common template from which to work. Between the basic outlines of the castle itself, we also needed to create common timelines so we all cohesively had something – the Halloween Ball, Bonfire Night, The Frost and Flame Ball, skating on the moat – happening at the same time. We wanted the reader to be immersed in the world with us.

Nancy: I went to Ludlow, a castle I love, and took more photos than any sane human could possibly want. While we took Ludlow as our inspiration, we also built Caynham Castle from others we’d visited in person or in photos and tailored it to story needs.

Below is the round chapel, which we all loved. It’s all that remains of the original chapel, which extended back in a rectangle from this circular part to the curtain wall. 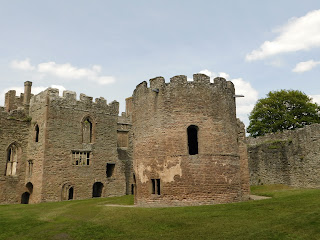 Jeanne: We did all love Ludlow’s chapel, so that became a feature in Caynham Castle. This unique, freestanding, round chapel features in several stories in the Christmas at Caynham Castle anthology. I had to draw a map of just the chapel because…well there’s a ringing room, with bells. And gargoyles. Shades of Hunchback of Notre Dame, right? Had to draw that.

Nancy: The first two pictures below are the great hall of Ludlow. Note the stones jutting from the walls’ upper edges. Supports like that are common for a hammerbeam ceiling. The third photo is of the hammerbeam ceiling in Westminster Hall, site of medieval coronation banquets. I love the hall and its beautiful roof. Thanks to Hollywood (looking at you, Adventures of Robin Hood), I think we all expect a castle hall to be as big as the one at Westminster, the fourth photo below. In reality, most are much smaller. 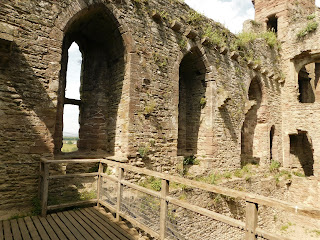 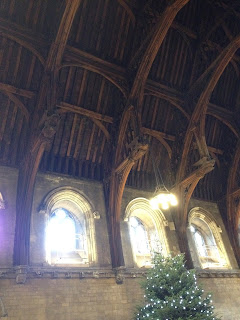 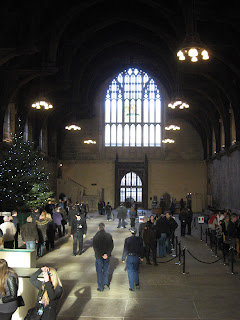 Jeanne: I didn’t draw the ceiling, but drawing the hall has been super fun. Of course, we adapted the Great Hall in the stories to be the Caynham Castle Hotel’s main dining room. It has an amazing, ox-roaster-sized fireplace with dragons and foliate (green man) heads on the mantel and side supports. Adding in the necessary “modern” amenities for a restaurant in a 11th century castle have been a fun challenge when it comes to the drawings, too!

Nancy: The definitely un-modern structure in photos below is the great hall of Middleham Castle (one with and one without Jeanne and me). The openings in the lefthand wall lead to what was the solar next door. Each had half of that level of the keep. See how much smaller it is than Westminster. 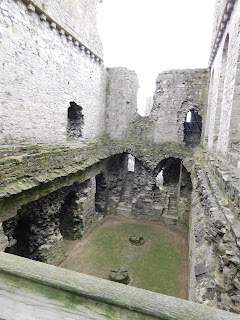 Jeanne: Nancy had to explain to the rest of us that a solar was where, in medieval times, the ladies would gather to sew because it had the best lighting. Virtually every castle has one, so Caynham had to have one too. Ha! In Caynham Castle Hotel, it’s an adjunct to the dining room and serves as sort of a lounge. It also houses the gift shop and can be closed off or used as an extension of the hall for special events, as it was in the Frost and Flame Ball for Christmas at Caynham Castle.

Nancy: At Middleham, the kitchen is below the great hall. This photo was taken from the kitchen, looking up at the platform that stands in for the floor of the hall. That placement made sense to us, so we gave Caynham Castle a kitchen below the great hall. We also added a terrace with parking underneath because modern hotel kitchens get deliveries via truck, not horsedrawn wagons. 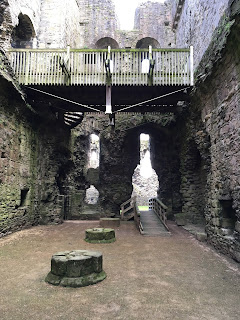 Jeanne: That also gave us a chance to create hidden spaces beneath the castle – treasure rooms! – and add a more “modern” solarium to Caynham Castle. Every castle may have had a solar for the long-ago ladies, but not every castle has a Victorian glass-house solarium. I’ve always loved the one at Asheville, NC’s, Biltmore House, America’s Castle. So why not at Caynham too?

Nancy: As you may’ve guessed, doing the maps meant Jeanne handled incorporating the features people needed for their stories. When you’re putting characters in a common space, it’s very important to have everyone visualize that space the same way in their heads and on paper. The diagrams have been invaluable for that.

Jeanne: Of course I took great delight in mapping all the fun stuff people came up with into the castle as well. Secret rooms. Display rooms set up with set-piece displays a la Downton Abbey. Statues by the Folly (Yes, there’s a Folly!). And don’t forget the lucky gargoyles allllll over the castle! *Grins.* That said, Donna needed the Folly. Anna needed the Ringing Room. Seressia needed a shop in town. And everyone needed a room at the Castle!

Nancy: We also created a town, Caynham-on-Ledwyche, to go with our castle. Ludlow is in the part of England bordering Wales, which is known as the Welsh Marches. The area is rich in history and legend, so we decided to site our town and castle there. We adapted features common to towns with long histories, including a mix of architectural styles spanning the centuries from half-timbered, thatched-roof buildings to modern British groceries like Waitrose. Jeanne did the diagram for the town, too.

Jeanne: Drawing the town truly was a study in collaboration, I must say. We added businesses as we needed them for our stories – a bookstore, pubs, tea rooms, a flower shop, a curiousity shop, an old and quite haunted church and churchyard, a secondary hotel, a brewery, some B&B’s. Each has its own history and some of them come with a touch of magic in them!

Nancy: Everybody contributed to the businesses, legends, castle features, and characters, and each of us used bits created by others. The overlapping was a lot of fun, but it makes for a very long copyright page!

Jeanne: Yes, but who could resist that pub? When we created the Boar and Knight pub everyone added a bit. Gail contributed photos of pubs she’d been in. Nancy and I used the concept of the fireplace area from a pub we’d visited in Yorkshire. I don’t remember who contributed the idea of the signboard listing the owners/proprietors down through the centuries, but that’s there too. I wrote in a happy macaw who welcomes people in.

Nancy: Here’s a photo of the fireplace at the Rose & Crown in Bainbridge, Yorkshire. The inn and its pub date back to the 15th century. 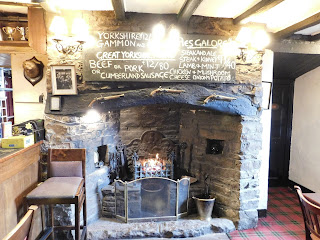 So that’s a little about the fun behind the scenes of designing Caynham Castle.

What’s your favorite book, TV show, or movie set in a castle? If you have any questions about the process of creating Caynham Castle or the anthologies, we’d be happy to answer them.
One randomly chosen person who posts a comment before 11:00 PM, September 26, will receive an e-book copy of Trick or Treat at Caynham Castle.
Posted by pjpuppymom at 6:00 AM