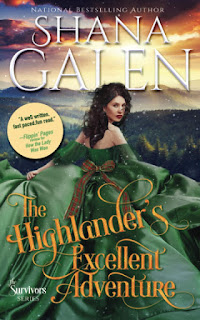 Just because they’ve run away…Ines Neves and Emmeline Wellesley have both run away. Ines hid in a carriage from a tedious suitor, only to find, too late, the carriage had traveled out of London, not just around the block. To make matters worse, the carriage is that of a stranger: a handsome Highlander. Or perhaps a big, strapping Highlander makes matters better? Emmeline Wellesley has had four Seasons and cannot tolerate another. To force her mother to listen to her, she’s run away. But things haven’t gone well. She’s been locked in a closet, had all her money stolen, and somehow adopted a dog. When an old family friend shows up to save her, she doesn’t exactly welcome his help.Doesn’t mean they don’t want to be found.Duncan Murray doesn’t know what to make of the Portuguese-speaking woman in his carriage. She refuses to return to London, so he takes her to meet Nash Pope, a so-called friend who speaks Portuguese. On the way, he meets up with former soldier Stratford Fortescue, and Stratford’s opinionated distant cousin, Miss Wellesley. The four travel together to Nash’s estate, and that’s when everything goes really wrong. On the run to Scotland, Duncan finds himself increasingly attracted to Ines, even though he knows he can never marry her. Stratford has always wanted Emmeline, but his family secret means he doesn’t deserve her. This excellent adventure might bring the couples together, but only if they manage to elude gun shots, a murderous brother-in-law, a vicious dog, and outlaws.
PJ's Thoughts:
This book is so much fun. I pretty much smiled through the entire thing. I'll even go so far as to say it's probably my favorite of the entire series, which is saying a lot considering how much I love this series. Galen gives us a fast-paced, road romance with not one but two couples on unexpected journeys to happily ever after and it just made me so darn happy.The main characters are very likable and I found myself easily rooting for all of them. Telling the story from each of their alternating points of view adds extra depth to the journey as well as the characters themselves and their relationships. I love a good road romance and this book had all the highs and lows to keep me engaged throughout. I was never sure what was going to happen next! I cheered Ines and Emmeline on during their bid for the freedom to make their own choices, laughed at how they ran circles around two battle-tested former soldiers (actually three, counting Nash, a drunken, half-blind former sharpshooter I hope we'll be seeing again), and sighed with delight as hearts entwined. I also fell head over heels for a huge, scary-looking dog who turns out to be a big ole cuddlebug, but handy to have around when his humans are threatened.There's conflict, and a bit of angst, but mostly this is a fun romp from London into the Scottish Highlands, filled with humor, danger, passion, excitement, and swoon-worthy happy endings...following some well-deserved hero groveling. I highly recommend it.While this is the 8th book in the Survivors series, it stands well on its own. However, if you would like a bit more background on Ines I recommend also reading her sister's journey to love with Benedict Draven in book 5, The Claiming of the Shrew. Actually, I recommend the whole series but you really will be okay starting with The Highlander's Excellent Adventure.
~~~~~~~~~~
Do you enjoy road romances? Have any favorites you would recommend?
Have you read any of the books in Shana Galen's The Survivors series?
One randomly chosen person who posts a comment before 11:00 PM (Eastern), September 12 will receive a Kindle copy of The Highlander's Excellent Adventure.
*Must be 18
Posted by pjpuppymom at 12:30 AM