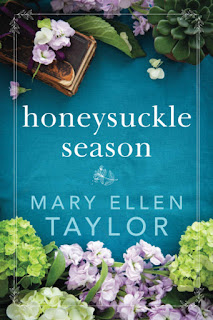 Adrift in the wake of her father’s death, a failed marriage, and multiple miscarriages, Libby McKenzie feels truly alone. Though her new life as a wedding photographer provides a semblance of purpose, it’s also a distraction from her profound pain.

When asked to photograph a wedding at the historic Woodmont estate, Libby meets the owner, Elaine Grant. Hoping to open Woodmont to the public, Elaine has employed young widower Colton Reese to help restore the grounds and asks Libby to photograph the process. Libby is immediately drawn to the old greenhouse shrouded in honeysuckle vines.

As Libby forms relationships and explores the overgrown—yet hauntingly beautiful—Woodmont estate, she finds the emotional courage to sort through her father’s office. There she discovers a letter that changes everything she knows about her parents, herself, and the estate. Beneath the vines of the old greenhouse lie generations of secrets, and it’s up to Libby to tend to the fruits born of long-buried seeds.

Honeysuckle Season is one of those books that is a total immersion experience. Once I began reading, I had to continue until the final page was turned, the final secret revealed. Two stories told in dual timelines, one in the early 1940's, the other in present day. Lives intersecting, long-held secrets exposed, forgiveness given, and hope restored. This book has it all.

Mary Ellen Taylor has a gift for bringing stories to life. She draws you into her world and into the hearts and minds of her characters. I could feel the desperation of Sadie as the story opened, feel the damp earth beneath her hands, hear the night sounds of rural Virginia as danger surrounded her.

There were three tricks to hiding. First, it was important to breathe as shallow as possible. If you were doing it right, your nostrils barely flared, and your breathing was as shallow as the James River in drought-hot summer heat. Next, a good rabbit tamed its racing heart and did not allow it to pound and drum against the ribs. Sounds had a tendency to echo beyond the confines of the body.

And the third trick, and not the least by far, was keeping your eyes cast downward. You never looked at whoever was hunting you.

Talk about capturing your audience. There was no way I was putting this book down after that. I had to know what happened next.

Alternating between past and present, and from different characters' points of view, this multi-generational saga slowly unfolds under Taylor's expert guidance. The fully-dimensional characters, realistic circumstances, perfect pacing, and exquisitely painted settings had events rolling through my mind like a cinematic masterpiece. This scene, with Libby in the old abandoned greenhouse at dawn, is one of my favorites. I can see it so clearly.

The morning air was already warm, and by the time she saw the structure, her shirt was damp. The sun was nearing the horizon and bringing with it streaks of gold and orange light.

She angled her body through the open door and moved to the center of the greenhouse. Enveloped by the thick moist air, she shut off her flashlight and tucked it in her back pocket. She snapped a few pictures of the dome but knew with one glance into her viewfinder the light was not right yet. Good photographers understood the right moment could not be rushed, and if captured, patience and speed were essential.

Seconds grew into minutes as the sun shyly nudged up over the sloping eastern horizon. The hints of light were brilliant.

She moved to the fountain and raised her camera to the dome. She clicked once or twice and glanced at the image. The right time was close. Water dripped, an animal scurried, and somewhere a glass pane rattled slightly in the breeze.

The air thickening, she sensed someone was standing behind her. She turned, expecting to see Colton or Elaine, ready with a babbling explanation about timing and light.

But there was no one there. There was only the whisper of the wind in the trees that stirred an odd sensation within her.

"Don't be silly," she whispered to herself.

And then, as if a curtain on a magnificent stage opened, the sun tipped above the horizon and made its entrance. Orange and yellow light kissed the glass dome and expanded into a rainbow of colors. Her mind calmed as she raised her camera, knowing she would get the shot.

Honeysuckle Season is an immersive experience that engaged my heart, my mind, and my emotions. I walked beside these characters every step of their journeys. If you enjoy multi-generational women's fiction with a romantic thread (and a happy ending), I highly recommend this book.