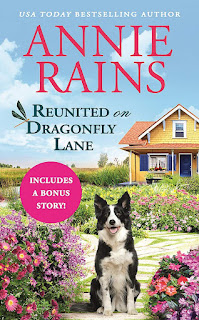 Boutique owner Sophie Daniels certainly isn't looking to adopt a dog the day veterinarian Chase Lewis convinces her to take in Comet. A rambunctious puppy with a broken leg may not be the best choice for a first-time pet owner. And house calls from the handsome doctor -- her high school sweetheart who's just moved back to Sweetwater Springs -- may not be the best choice for her heart either.Chase has come home to help his nephew but finds that he's forgotten just how much he enjoys small-town life. However, sooner or later, he's going to have to face the past and his unresolved feelings for Sophie. Now that Comet needs both their help, Chase is going to let the four-legged matchmaker work his canine magic. Then Chase will prove to Sophie that first love is even better the second time around.
PJ's Thoughts:
Over the past few years, Sweetwater Springs has become one of my favorite fictional small towns to visit. With each book in the series I read I feel like I come home for a visit with old friends and leave with new ones.
As Annie Rains has done with each book in this series, Reunited on Dragonfly Lane features a likeable main couple readers will find it easy to cheer for. High school sweethearts who were in love but too young to handle the strain of a life-threatening accident, Chase and Sophie went their separate ways when they were eighteen. Now, ten years later, Chase has returned to town and they're both dealing with the fact that those feelings they thought had been left behind in their teens are, in fact, ready to flare to life once again. But each of them has unresolved emotional baggage to overcome for this second chance at love to succeed. Their journey is poignant and heartfelt, with forgiveness and acceptance at its core. I was with them every step of the way.
Sophie and Chase are both fully developed characters with layers, flaws, and relatable obstacles to overcome. The yearning between them is palpable but I appreciate the fact that Rains takes her time with them this second time around, allowing them to slowly rebuild their foundation of friendship and trust before taking their emotions deeper. She also surrounds them with a supportive cast of secondary characters, enhancing the community feel of the story. I especially enjoyed Sophie's best friend Trisha and Trisha's young son, Petey (Chase's former sister-in-law and nephew) who have key roles in this book. I'm hoping Rains has plans for them in her next series.  Creating a sense of community is something this author does well. But while her ensemble cast gives fans of the series a "welcome home" feeling with every new book, she crafts each story in such a way that a reader is able to begin with any of the seven books in the series without feeling lost or confused.
If you enjoy sweet, small-town, contemporary romance with relatable characters, heart-tugging, emotional depth, satisfying sexual chemistry (without on-page sex), and a feel-good happy ending, I enthusiastically recommend Reunited on Dragonfly Lane, along with the rest of the books in the Sweetwater Springs series. I'm sad to bid farewell to Sweetwater Springs but I'm already looking forward to whatever Annie Rains has planned for readers next.
Have you read any of Annie Rains' books?
Do you enjoy your contemporary romance sweet or spicy? Or do you like both?
A cute dog on the cover of a book is an automatic magnet for me. How do you feel about pets in romance? 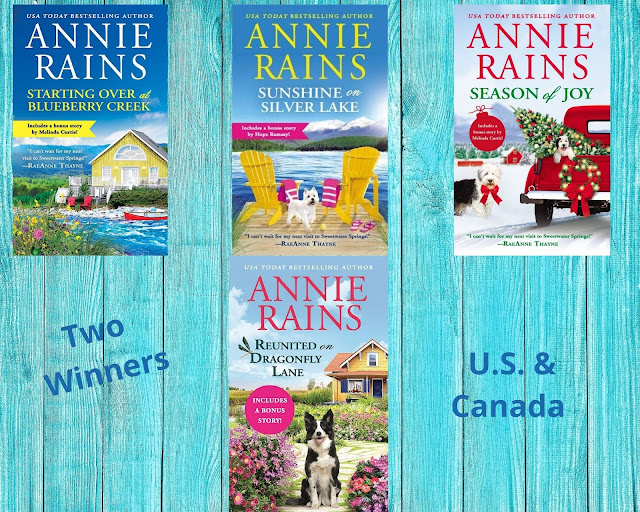 Thank you to Forever Romance for this fantastic giveaway.
Two randomly chosen readers who post a comment before 11:00 PM, January 29 will each receive a bundle containing the four Sweetwater Springs books pictured above.
*Must be 18
*U.S. and Canada only
Posted by pjpuppymom at 1:00 AM