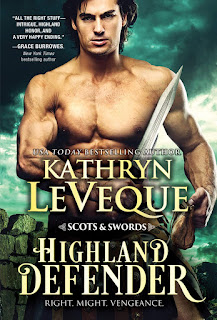 Ashamed of a decision he made in battle that cost good men their lives, the dark Highlander Bane Morgan escapes to Edinburgh to forget his past. But the more time he spends away from his Highland home, the more he's filled with regret and despair.

Lucia Symington knows something about despair. Forced to work off a family debt for a clan with little moral compass and a particular hatred for her, Lucia loses herself a little more each day. When a chance meeting with Bane gives them both a glimpse of what their future together could be, Bane pledges himself to the Ludus Caledonia, the warrior training club where he can reconnect to the fire for justice that still burns within him. The Highland Defender has returned...only to discover that his quest to free his lady could cost them both everything...

PJ's Thoughts:
Combining adventure and romance, Highland Defender is another enjoyable story in Kathryn Le Veque's Scots and Swords series. Le Veque has become one of my favorite authors writing in the medieval era. Her characters, settings, and situations, even the Ludus Caledonia (the Cal), appear fresh, original, and authentic to the time.
Bane and Lucia were both sympathetic characters in whom I quickly became invested. Battling depression and survivor's guilt, Bane had given up on life but, most importantly, on himself when he first encountered Lucia. A good, honorable, and loyal man, he had made a decision guided by the pride and arrogance of youth, and was still paying the emotional price. Lucia was not in the best of situations herself, though better than Bane. Her situation had come about due to her innate sense of honor but had begun deteriorating to the point where her life could easily be at risk. I really felt for these two and the situations they were in. I liked them and was cheering for them to overcome the hurdles in their path.
The first part of their story is slower paced but the action picks up by the half-way point. I especially enjoyed the fight scenes at the Cal. I also appreciated that the author had no easy or quick fixes for Lucia and Bane, taking the necessary time for each of them, Bane in particular, to rediscover their inner strength and courage to overcome the obstacles life has given them. It made their decisions, their bond, and the conclusion of their story, that much more satisfying.
There is a strong secondary cast surrounding Bane and Lucia in this book. I especially enjoyed a young boy and an elderly laird who have a profound impact on the hero and heroine. There is also a particularly nasty villain. Actually, two. Without giving away any spoilers, I'll just say that justice was very sweet.
This is the second book of a series but can be read and enjoyed on its own. I will say, however, that having read book one, Highland Gladiator, it was fun to catch up with several characters from the Cal and learn more about some of them. It has only made me more excited for book three.
Posted by pjpuppymom at 2:00 AM