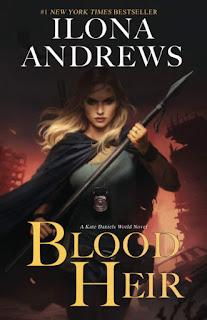 Atlanta was always a dangerous city. Now, as waves of magic and technology compete for supremacy, it’s a place caught in a slow apocalypse, where monsters spawn among the crumbling skyscrapers and supernatural factions struggle for power and survival.Eight years ago, Julie Lennart left Atlanta to find out who she was. Now she’s back with a new face, a new magic, and a new name—Aurelia Ryder—drawn by the urgent need to protect the family she left behind. An ancient power is stalking her adopted mother, Kate Daniels, an enemy unlike any other, and a string of horrifying murders is its opening gambit.If Aurelia’s true identity is discovered, those closest to her will die. So her plan is simple: get in, solve the murders, prevent the prophecy from being fulfilled, and get out without being recognized. She expected danger, but she never anticipated that the only man she'd ever loved could threaten everything.One small misstep could lead to disaster. But for Aurelia, facing disaster is easy; it’s relationships that are hard.
PJ's Thoughts:
Before beginning this review I should confess that I haven't read any of the ten books in the Kate Daniels series. I was introduced to Ilona Andrews' writing through the Hidden Legacy series (which I highly recommend) but found the ten books in the KD series a bit daunting when my reading time is at a premium. Did not reading those books have a negative impact on my ability to enjoy Blood Heir, the first book in a new spin-off series, featuring a key character from the KD series? Absolutely not! Did reading Blood Heir make me want to download the entire KD series and begin reading those books immediately? Well, let's just say that Magic Bites (the first KD book) is now waiting on my Kindle and leave it at that.
One of the things I most enjoy about an Ilona Andrews book is the world building; how this husband and wife writing team expertly brings a well-known, present-day city to life in an entirely new, unexpected, and realistic way. I've been to Atlanta many times, driven her streets, visited her neighborhoods. Andrews' post-shift Atlanta is like nothing I've ever seen and yet it's brought to life so vividly that I had no trouble imagining it. The attention to detail (street intersections, college campuses, local eateries) give it a striking authenticity and sucked me into the belief that this Atlanta could actually exist.
And then there are the characters. The care that is taken in creating each of the characters makes the reading experience all the more powerful. No single-dimension, cardboard cut-outs here. Each one is given layers and complexities that convince the reader that these are not really characters in a book but actual people who are walking the streets of post-apocalyptic Atlanta. When they engage their magical abilities, it seems natural. When they shift into another form, it's exhilarating rather than surprising.
Many of the characters in this book were introduced, or had story arcs, in the Kate Daniels series but I never felt lost or confused when meeting them in Blood Heir. Andrews skillfully inserts bits and pieces throughout the book that paint a complete picture of each cross-over character, and their back story, without the onerous info-dump that is so often inserted into a book that connects to a prior series. I had no difficulty connecting with them and understanding their motivations.
I love how this author uses a wide range of breath-stealing danger, heart-wrenching emotion, unexpected humor (yes, I did snort-laugh in a few places), and everyday activities (a heroine who de-stresses from fighting monsters by baking cookies) to illustrate the many sides of these characters and create a bond between them and the reader. I am now fully invested in Aurelia/Julie, Derek, little Marten, Douglas, and more. It doesn't matter if it takes four books or ten to complete their stories. I plan to be here for each and every one of them.
Posted by pjpuppymom at 12:30 AM