Review - - The Ballad of Hattie Taylor 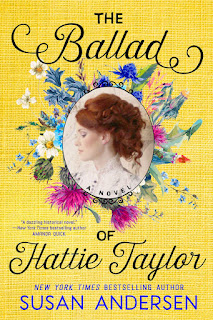 In the small, bustling town of Mattawa, Oregon, the turn of the century offers a new kind of frontier for women: a vast and exciting range of possibilities--to a point. It's a time for change, and no one is more eager to embrace new paths than free-spirited outsider Hattie Taylor. If only she could embrace Jake Murdock too. Jake can't remember a time he was so confused. Hattie is off-limits. The provoking spitfire is under his mother's protection--his protection--and he has always belonged to another. But now, with the passing of his wife, Jake feels something shift between them. Frustratingly aware of Hattie as a woman, he struggles with new feelings, new questions, new desires. But when a desperate decision born of good intentions turns out to have ugly repercussions, Hattie confronts a cruel reality she can no longer ignore: the truth of where women really stand and the actions men take to keep them there. To navigate her new world of tainted justice and privileged order Hattie will draw on the strength of the women around her--and Jake will learn what it truly means to support the woman he loves.
PJ says:
The Ballad of Hattie Taylor is a saga that follows the life of orphaned Hattie from the age of eleven to her early twenties. Set in Oregon at the turn of the 20th century, it not only tells the story of Hattie but reflects upon the lives of all women of that era. It was a time where exciting possibilities were opening up but also when a woman's reputation was precarious and inequalities existed, not only between women and men but between women of different classes. Societal issues are highlighted through the actions of the characters as well as the (sometimes brutal) injustices they suffer.
The book is a well-written, thought-provoking, page-turner with complex, fully-formed characters and complicated relationships. Readers are taken on a life journey that evokes a full range of emotions. Make no mistake, this is Hattie's story and it is a compelling one. She is a character who endeared herself to me early on and I was firmly in her corner from start to finish. But there is also a rich supporting cast of characters who are vividly portrayed and critical to Hattie's story. Like many sagas, while they have pivotal parts to play in Hattie's life there are also individual stories to be told. Stories that will also evoke strong emotions. One that made a significant impact on me is that of a young maid, a minor character, but with an important role, whose courage I greatly admired and whose circumstances clearly delineated the line between classes.
It would be hard to discuss Jake in too much depth without giving away spoilers so I'll just say that my feelings about him, as well as his relationship with Hattie, and his relationship with his first wife, are mixed and leave it to you to make your own decisions about him.
There are parts of this book that will not be easy to read and many issues women still face today that I was left pondering long after finishing the book. Readers should know that Hattie ultimately claims a happy ending but it certainly isn't won without a lot of pain, forgiveness, healing, and internal strength.
Content Warning:
One thing the author does not do in this book is hold back from harsh realities of life. There are some major triggers that I was unaware of before beginning the book and the impact they had on me was deep. Not only was I filled with heartache and rage for the entire second half of the book, I'm still haunted by what happens to these characters. Readers who are sensitive to these topics should be aware that they will be dealing with the following issues on the page:
Rape
Beating
Adult death
Death in utero
Posted by pjpuppymom at 12:30 AM