Spotlight on The Heiress Gets a Duke 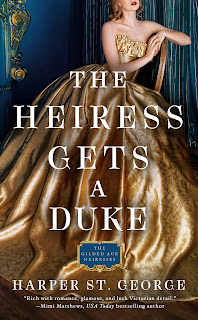 Even a fortune forged in railroads and steel can't buy entrance into the upper echelons of Victorian high society--for that you need a marriage of convenience.American heiress August Crenshaw has aspirations. But unlike her peers, it isn't some stuffy British Lord she wants wrapped around her finger--it's Crenshaw Iron Works, the family business. When it's clear that August's outrageously progressive ways render her unsuitable for a respectable match, her parents offer up her younger sister to the highest entitled bidder instead. This simply will not do. August refuses to leave her sister to the mercy of a loveless marriage.Evan Sterling, the Duke of Rothschild, has no intention of walking away from the marriage. He's recently inherited the title only to find his coffers empty, and with countless lives depending on him, he can't walk away from the fortune a Crenshaw heiress would bring him. But after meeting her fiery sister, he realizes Violet isn't the heiress he wants. He wants August, and he always gets what he wants.But August won't go peacefully to her fate. She decides to show Rothschild that she's no typical London wallflower. Little does she realize that every stunt she pulls to make him call off the wedding only makes him like her even more.
Excerpt #1
The Heiress Gets a Duke

The very air in the room altered when August entered. She was simply stunning wrapped in her Worth gown and her confidence. She pulled the door closed behind her, her chin parallel with the floor and her shoulders squared to face him. It was almost as if she had been born to be a duchess.

“You are angry with me.” Noting the way her small hand kept a secure hold of the doorknob as if she intended to leave at the first sign of trouble, he stayed where he was so that he would not frighten her. He wanted many things from the woman before him, but her fear was not one of them.

Eyes bright with her fury, she said, “Of course I am. Do you have any idea what you have done?”

Even though he knew that it would only goad her, he could not stop the smile from twisting his lips. “I presume you mean the waltz?”

“You know precisely what I mean. Everyone thinks that you intend to propose to me now instead of Violet.”

It was terrible of him, but he could not resist himself when it came to her. Smiling widely now, he leaned a shoulder against a shelf and said, “You did ask me to not dance with her tonight, if I recall.”

She violently let go of the doorknob, if such a thing was possible, and crossed her arms over her chest to pace the short distance to the low-burning fireplace. The library was a small but comfortable room with dark oak paneling and a seating area with several overstuffed chairs and low tables set before the fire. Aside from the bookcases framing the mantel, and the row of them at his back, they were the only furniture in the room. Had she kept the chairs between them because she feared being alone with him? A twinge of guilt made itself known that she was probably right.

“I should have realized you would make this into another sparring match. Whatever your reasoning, you have made everyone believe that you intend to propose to me. Why would you do that?”

She could not look directly at him when she asked that. Her gaze had settled somewhere along his ear. Interesting. Also of note, the color on her cheeks was higher than when she had walked into the room. Partially due to her anger but, he would be willing to bet, also because she was as attracted to him as he was to her. Watching the myriad of expressions on her lovely face during their waltz had made him suspect as much. Now he knew for certain.

Tipping his head slightly to attempt to force her to meet his gaze, he explained, “Perhaps because I do mean to propose to you. Have you considered that?” He was surprised to find that his heart was pounding with those words.

Breath lodged in her chest as she jerked to meet his gaze. “What? No.” Her lips parted as she appeared to struggle to form her next words. “I . . . I do not accept.”

Not yet, but she would. “I have not proposed to you, yet.”

Having overcome her apparent shock, she drew herself up. “That hardly matters. I won’t accept when you do, so you shouldn’t bother.”

“Thank you for the fair warning, but I rather hope to change your mind.”

She laughed at that. Laughed as if he were a lowly servant asking for her hand rather than a duke. “Impossible.”

For the first time that night, a glimmer of anger burned in his chest. “I am a respected peer with four estates and—since I lack the requisite excessive weight and want of hair of others in my position—more than a passing attractiveness.”

She took in a breath and closed her eyes briefly before catching him with that directness he found both enticing and unsettling. “The fact that you believe those are the only things that recommend you as a spouse is both troubling and sad.”

He could only stare at her, taken aback by her opinion. “As troubling and sad as they may be to you, they are very sound reasons for marriage. Why would you not want to marry me?”

Crossing her arms over her chest again, she asked, “Why on earth would I ever marry you? You truly cannot fathom a woman turning down your offer of marriage, can you? I do not intend to marry you, because I like my life as it is now. You have absolutely nothing to offer me.”

“Nothing is such a strong position.” He heard himself saying the words and moving forward without ever consciously thinking of what he was saying. “You like kissing me. The marriage bed will be no hardship for either of us.”

As he wove around the chairs separating them, she took a step back until she came up against the bookcase. The soft flames of the fire lit up the rose of her cheeks and the interest in her eyes. They had fallen to rest on his mouth, much as his own gaze was eating up the sight of her soft lips. It was amazing how the simple reminder of their kiss had changed them both so fast.

Dear God, to have her in bed beneath him would be one of the greatest accomplishments of his life.

“That is hardly . . . That is no reason . . .” Her gaze moved back and forth between his eyes and his mouth as he came to a stop in front of her. Near enough to touch, but he did not dare take that path yet. “Are we like horses to you, then? Choose the mare you would prefer to breed and we all simply go along with your choice?”

He managed to swallow down his laugh, even as her words made heat pulse in his veins. “That is not at all how I see this, and it is hardly fair to assume as much when I am willing to negotiate.”

“Not fair?” The softness that had crept into her eyes was burned away by a new wave of anger. “You have some nerve speaking to me about fair play. None of this is fair. You decide you need money and then decide to marry to get it. Now you’ve decided that I will be your convenient bride, no matter how I feel about it.”

This time he could not hide his laughter. “I assure you that you are anything but a convenient bride. You are the most stubborn and infuriating woman I have ever met.”

~~~~~~~~
I'm looking forward to reading The Heiress Gets a Duke.
Do you enjoy stories set in the Gilded Age? What is it about this era that intrigues you?
Have you read any Gilded Age romances you would recommend?
Posted by pjpuppymom at 12:30 AM