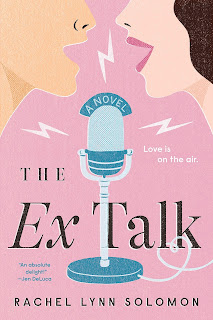 Shay Goldstein has been a producer at her Seattle public radio station for nearly a decade, and she can't imagine working anywhere else. But lately it's been a constant clash between her and her newest colleague, Dominic Yun, who's fresh off a journalism master's program and convinced he knows everything about public radio.  When the struggling station needs a new concept, Shay proposes a show that her boss green-lights with excitement. On The Ex Talk, two exes will deliver relationship advice live, on air. Their boss decides Shay and Dominic are the perfect co-hosts, given how much they already despise each other. Neither loves the idea of lying to listeners, but it's this or unemployment. Their audience gets invested fast, and it's not long before The Ex Talk becomes a must-listen in Seattle and climbs podcast charts.   As the show gets bigger, so does their deception, especially when Shay and Dominic start to fall for each other. In an industry that values truth, getting caught could mean the end of more than just their careers.

The Ex Talk by Rachel Solomon was a refreshing 4 star read for me. I really liked both the heroine and hero in this book. Both are passionate about their work at a local public radio station and, as it turns out, each other.

Our heroine, Shay Goldstein, works as a producer for several shows at the station. Her life is an ordered one. She always uses the same sound booth at the station, she meets weekly for dinner with her mom, her best friend from childhood, and their respective boyfriends. Her boyfriend would join except he bolted as soon as she used the L-word. It has been several months since the break up and in an effort to move on Shay buys a house. A big, empty, lonely house. She is an adult now and has been saving up for one ever since she started working but something is still missing in her life. At this point, her choices are to either swipe right on a dating app or get a pet. Still gun shy on the relationship front she goes to the shelter and picks a wily Chihuahua to cuddle up with on those cold Northern Pacific nights.

The only thing or person left disturbing her peace and using HER studio in her time slot is the new kid in town. Domenic Yun, fresh from earning his masters degree in journalism, is eager to be at the top and covering only real news items. He probably can see how miffed she is whenever he does wrong, which is often. But he just shrugs his broad shoulder and unfolds his tall, lanky body from her chair. So smug, so sure of himself and so good looking but Shay has no time for any of that now.

Especially now when management calls a meeting to brainstorm ideas that will attract a larger audience to their fledgling station. It seems that fundraising drives are no longer doing that trick. Somehow they could possibly make the show into a podcast reaching an even bigger audience. Someone suggests a show based on the new digital dating scene and how to navigate it which somehow becomes a show featuring two people who are no longer dating to talk about dating other people. Their boss suggests Shay and Domenic host the show. There’s just one problem - actually several problems - but most importantly, they never dated. They barely know one another outside of work. Never mind any ethical issues like they would be lying to their audience.

The other problem is that Domenic is dead set against it! He’s a serious reporter not some talk show co-host. It takes a bit of convincing on Shay’s part. After all, their jobs are on the line. He finally agrees and in an effort to seem somewhat sincere they get to know one another better. They become closer and get to know one another’s vulnerabilities and hurts. Domenic, a Beta hero in the finest sense, has always been attracted to Shay. They fall in love in a sort of reverse order of what the show is all about. However, deceit has its price and a betrayal all but crushes their relationship. It will take a great deal of work for one of them to be brave enough to fight for their love.

I highly recommend this book to anyone who likes an enemy to lovers story, You will cheer for them as much as I did.