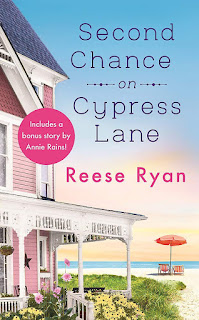 Rising-star reporter Dakota Jones is usually the one breaking the news---until an inadvertent scandal wrecks her career. The only place she can go to regroup is Holly Grove Island. But her small South Carolina hometown comes with a major catch: Dexter Roberts, the first man to break Dakota's heart, is her new boss. Working alongside Dexter, who is more attractive than he has a right to be, shows Dakota what might have been . . . but she isn't giving him another chance to break her heart.Dexter has always regretted the way things ended between him and Dakota. Her return could be his opportunity to finally make amends. But the more time he spends with Dakota, the more he realizes his feelings for her never went away. Now he has just a few months to convince her to give their love a second chance. But for Dakota to agree to stay, Dexter will have to reveal the devastating truth about why he let Dakota go all those years ago.
PJ's Thoughts:
Second Chance on Cypress Lane launches what I hope will be a long-running series as I have fallen hard for all of these characters and their small town in North Carolina's Outer Banks. Ryan brings them all to life with her vibrant descriptions of both people and place.
I love a second-chance romance and this one is filled with all the goodness I hope to find in this trope. Dexter has had a long time to regret breaking up with his high school sweetheart. Yes, his motives were pure but that sure hasn't lessened the heartache they caused. I was in his corner cheering him on to win her back. He's such a good guy, was in a no-win situation back then, and his heart still knows what it wants. He was really not much more than a boy the last time they saw one another but now, boy howdy, now he is a man. Successful, sexy, thoughtful, loyal, and he plays alto sax in a local band, staring soulfully into Dakota's eyes from the stage? If she didn't want him I was more than willing to drive over to the coast and claim him for myself!
For Dakota, raised to believe her small town had nothing to offer and she would only find success in the big city, coming home is not what she expected. There are revelations around every corner, both professional and personal. I enjoyed her assimilation back into the town; reconnecting with her childhood best friend (everyone should be lucky enough to have a friend like Sinclair), learning to be more accepting, discovering a professional path that's both fulfilling and brings her joy, and rekindling the sizzling chemistry she'd always shared with her first love. The new, adult relationships she forges with her father and with Dexter show how much she's grown as does her emotional navigation of the secret both men have been carrying. By the end of the book, I was fully confident that Dakota was where she was meant to be and would continue to flourish with Dexter by her side.
Now, on to the next couple and the next chapter of life in the charming, seaside town of Holly Grove Island. I don't know when book two will be released but I am all in!
~~~~~~~~~~
Have you read any of Reese Ryan's books?
Do you enjoy small-town romance?
I love the sand, surf, and seaside breezes of Holly Grove Island. What's your favorite small-town setting?
One person who posts a comment before 11:00 PM, January 8 will receive a print copy of Second Chance on Cypress Lane.
*Must be 18
*U.S. addresses only
Posted by pjpuppymom at 12:30 AM