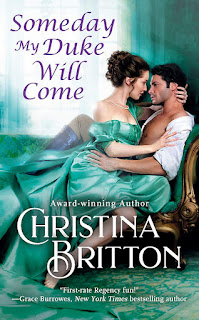 Lady Clara Ashford had no intention of ever getting married. A rogue took advantage of her innocence when she was young, and she's spent her whole life trying to make sure no one finds out. But now that her sister is engaged, Clara's well-meaning aunt has set her sights on Clara. Desperate to avoid the matchmaking schemes, Clara's not sure what to do -- until her neighbor, the new Duke of Reigate, shows up on her doorstep in need of her help.Quincy Nesbitt reluctantly accepted the dukedom after his brother's death, but he'll be damned if he accepts his brother's fiancée as well. The only polite way to decline is to become engaged to someone else -- quickly. Lady Clara has the right connections and happens to need him as much as he needs her. But he soon discovers she's also witty and selfless, and if he's not careful, he just might lose his heart.
PJ's Thoughts:
Since meeting Quincy and Clara in book one of this series, I have been eagerly anticipating their story and I'm happy to say Someday My Duke Will Come did not disappoint.
I loved these two and their friends-to-lovers/fake engagement romance. Clara has given so much of herself to ensuring the happiness of those she loves, without any thought for her own. At thirty-one, she's firmly on the shelf, even if she does occasionally long for a family of her own. She's also calm, selfless, and nurturing but with an intriguing bit of fire she keeps well hidden. It was such a pleasure to watch those simmering coals ignite, first in her defense of Quincy then later when their friendship takes a deeper turn. There are also emotional depths to her that she has suppressed over the years. Watching her come to terms with the events of her past was both heart-wrenching and empowering.
And then there's Quincy. ::Sigh:: He's the hero many of our hearts seek. Charming, fun-loving, steadfast, loyal, a gentleman to his core, incredibly sexy, and endearingly vulnerable. I adored him. His life experiences (as a young boy in England and as a man in America) have given him emotional depths that he also keeps well hidden. My heart ached for him as his story unfolded but rejoiced as certain truths were brought to light. He's the kind of hero who makes you want to laugh with him, play with him, hug him, and drag him off to have your way with him. Did I mention how much I adored him?
I love the path Britton took with Quincy and Clara, bringing them together first as partners to defeat the villainous duchess, then evolving into friends with lively banter and subtle flirting, building their chemistry until it ignites, then finally guiding them to a deep, abiding love. I like that they each have an individual journey and growth arc within the journey they take as a couple and that those individual lessons help bring them closer to one another. I turned the final page of their story with a heartfelt smile and a happy sigh. It doesn't get much better than that.
While Someday My Duke Will Come can be read as a standalone, it does feature several characters from book one, A Good Duke is Hard to Find. You can absolutely start with book two and enjoy it but I believe you'll enjoy it more if you read the books in order. The third book in the series, A Duke Worth Fighting For (Margery's story), is scheduled for release in August 2021. I already have it on pre-order and am counting down the days until my next visit to Christina Britton's Isle of Synne.
Have you read Christina Britton yet?
Tell me about a fictional hero you've fallen in love with recently.
Do you enjoy historical romances that take the characters out of London?
One randomly chosen person who posts a comment before 11:00 PM, January 15 will receive a print copy of Someday My Duke Will Come.
*Must be 18
*U.S. addresses only
Posted by pjpuppymom at 12:30 AM