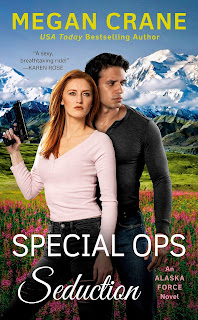 She's the last woman he ever wanted to see again...
After an official operation turned deadly, Jonas Crow began a new life in Grizzly Harbor with Alaska Force. But when fellow soldier Bethan Wilcox joins the group, she forces him to remember things he actively prefers to forget. That’s unforgivable enough. But now the two of them are forced together on a mission to uncover deadly secrets tied to their complicated past, and with the heat between them at a boil, forgiveness is the least of his worries...And the only woman he needs.
Bethan Wilcox, one of the first women to make it through Army Ranger school, didn't join Alaska Force to deal with Jonas's foul temper. Or her own errant attraction to him. Thrown together in a race against the clock, they have to pretend to be a couple and play nice to throw the enemy off their scent. She knows better than to let their pretend love feel real...especially while time is running out.Jonas has always been good at saving the world. But it’s Bethan he needs to save this time around—if she doesn’t save him first.
PJ's Thoughts:
Once again, Megan Crane has crafted a romantic suspense novel that kept me on the edge of my seat while also giving me the heart-tugging emotion my romantic heart desires. For you adrenaline junkies, don't worry, there's plenty of heart-clenching action, suspense, and danger in this one. But it's expertly balanced with an emotionally-satisfying relationship that is by no means a given. These two have a lot of issues to work through.
I loved the dynamic between Bethan and Jonas. Two kick-ass members of Alaska Force, they are, literally, lethal weapons. They are also complex people with a history that colors their current relationship, such as it is. Even though they're teammates, they are neither friends nor lovers. In fact, they (especially Jonas) avoid one another as much as possible. So what does Crane do to them? Why, she throws them into an undercover operation at Bethan's family wedding, posing as a couple, with national security at risk, of course. I mean, really, what could go wrong?
Special Ops Seduction is another page-turner that I did not want to put down. The suspense gets more intense with each chapter, eliciting gasps, hand wringing, and, at one point, actual begging to please allow the characters to find a way out of their predicament. As a counterpoint to that, we have the gradually changing romantic relationship between Jonas and Bethan as well as an individual growth arc for each of them. There is much healing that needs to occur before they can claim happiness together. I enjoyed the dichotomy between the highly trained soldier, ready to kill to protect their country and the soft, squishy, center they ultimately discover they each hold for the other. I also appreciated the fact that the author gave them the necessary time to reconcile these two halves of themselves. The secondary cast provide humor, tension, complex family relationships, and a truly evil villain with a diabolical plan...and an unexpected connection to our hero and heroine. Crane did an exceptional job of weaving the many, seemingly disparate, threads of this story into a compelling journey with breath-stealing and life-threatening surprises around every corner and I was there for every single bit of it.
I don't know what Megan Crane has planned next but, after reading the Alaska Force series, you can bet it will be on my must-buy list.
Posted by pjpuppymom at 12:30 AM