Warning: There is a spoiler in this review, though it’s probably one most readers expect. 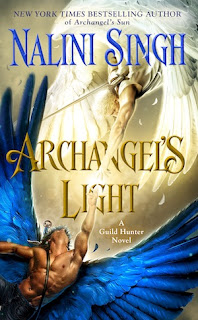 Archangel’s Light is one of Singh’s most anticipated books. It recounts the long friendship of two young angels, Illium and Aodhan, from their meeting as children through the trials they both experienced, including the war against the now-deceased Archangel Lijuan of China, to the present discordant state of their treasured rapport.

The book opens with Aodhan in China, former territory of Lijuan. He’s serving as second to new archangel Suyin, helping her root out the deposits of evil that remain in the country despite Lijuan’s death. Illium, known as Bluebell, is in New York with archangel Raphael, as usual, until Raphael sends Illium to China to offer Suyin additional help. His coming puts him and Aodhan in unavoidable proximity that forces them to confront the disruption of their relationship.

The story alternates between present time, with Aodhan and Illium working to clear Suyin’s territory of residual darkness and help resettle her people, and the past, which spotlights vital moments in their friendship. The character bits are, quite simply, brilliantly done. The first few show the development their childhood bonds with each other and with Raphael and Aodhan’s growing closeness to Illium’s mother, Lady Sharine, the artist also known as the Hummingbird. Lady Sharine discovers early that Aodhan has a gift for art, the background to his career in adulthood as a sought-after artist.

When Illium’s father, Aegaeon, goes into Sleep, a sort of suspended animation, abandoning Illium and Lady Sharine with premeditation but no warning, Raphael and Aodhan comfort and support Illium. We see part of the reason Raphael and Illium are so close. Illium in turn dedicates himself to supporting his mother, whose mind fractures as a result of this cruelty.

We also see the truth of Illium’s lost mortal love and of the torment that made Aodhan withdraw from the world for centuries. Like Lady Sharine, Aodhan didn’t withdraw forever, and his psychological healing forces a new balance between him and Illium that neither really knows how to handle. They struggle to find their way while trying to secure China for its people.

Along the way, Singh sets up what may be hints of stories to come. Aodhan and Illium find an abandoned child with a horrifying background and potentially menacing heritage. The possibility that Illium ascend to archangelic status and what that will mean for these friends comes through the story.

At its heart, though, lie the twists and turns of a friendship and love developed through millennia. One of my favorite bits is early in the book when Lady Sharine escorts Illium and Aodhan, then very young, to school for the first time so they can make new friends.

Now Aodhan looked at her with big eyes. “My friend, Blue.”

“Yes. You’ll always be friends with Illium. But that doesn’t mean you can’t have other friends.”

“Adi my friend,” Illium said in his most stubborn tone of voice, his little forehead scrunched up darkly.

Oh, dear.… She’d make it a point to tell Jessamy to put the boys into different groups for games. Else, they’d pair up, demolish everyone else, and not widen their circle.

The boys play together, get in trouble together, Aodhan often taking blame that belongs to Illium but also standing up for himself with his friend.

The present-time conflict between the two mostly comes from Aodhan’s recovered ability to stand on his own and his feeling, months before, that Illium’s caretaking tendencies are smothering him. The key to working this out comes from Lady Caliane, Raphael’s mother, whose simple recitation of certain events gives Aodhan a new perspective. Suddenly he sees why Illium acts as he does.

SPOILER (2 Paragraphs): Toward the end of the book, after Aodhan gains this insight, there’s a tender moment in which one of the two sets their relationship on a different track, moving them toward becoming lovers. What follows that moment is all beautifully done and doesn’t stint on their fears of what could happen to their friendship if this doesn’t work. The moment, itself, though, felt shortchanged to me.

In any friends-to-lovers romance, there’s a moment when one friend realizes they want more. Then they reach for it. I didn’t get a sense of that here. It seemed more like an impulsive action that then led to a mutual realization, though they were still conflicted as to whether this could work. That’s fine, but I wanted the motivation, just a line or a thought, before the action. Others, of course may feel differently.

END SPOILER: That’s my only quibble with a book that’s otherwise brilliantly executed. It’s an important moment, though, enough so that I can’t give the book 5 stars. Archangel’s Light is full of warmth and angst and love and loyalty Despite the flashbacks, the story moves at a good pace, and the supporting characters are sympathetic and have potential.

This book will particularly appeal to readers who’ve waited for these angels’ story. I think readers can also follow and enjoy it without that background, though, thanks to the context the flashbacks provide.