Review - - A Wanton for All Seasons

A Wanton for All Seasons
by Christi Caldwell
Wantons of Waverton - Book 3
Publisher: Montlake
Release Date: November 2, 2021
Reviewed by PJ 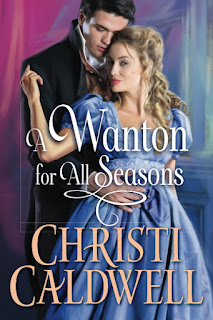 Annalee Spencer and Wayland Smith were uninhibited young lovers until the Peterloo Massacre set them on two different paths. Raised to the title of Baron of Darlington in recognition of his courage, Wayland is now a model of propriety and heroism. As for Annalee, the trauma of that tragic day in Manchester is ever present. To dull the pain, she lives only for pleasure. And she derives immense pleasure from co-leading the Mismatch Society, a league of scandalously independent women. Perhaps too scandalous…because of Annalee. To save the society, she must adopt a veneer of respectability. For that she needs the man who’s won the admiration of the ton.

Wayland may be conflicted, but he agrees to Annalee’s proposal, if only to atone for having brought his former beloved to Peterloo on that fateful day. Reunited under the pretense of a courtship, Wayland and Annalee find the feelings between them are becoming real. With their own futures at stake, it’s finally time to confront the past, to trust in each other again, and against the odds, to reclaim the love they once had.

Caldwell explores PTSD and the different ways it can impact a person's life in this deeply emotional story about facing one's demons, forgiveness, acceptance, and second chances.

The one thing I can count on when I pick up a Christi Caldwell book is that I'm going to be taken for an emotional ride and this book certainly delivers. Annalee was a bit of a puzzle to me during the first two books of this series. She was clearly on a self-destructive path that was somehow tied to her experiences at Peterloo but we don't learn the particulars until this book. My heart broke for her. She's clearly struggling and has been for years yet the only people to reach out, the only people offering unconditional love and support are her 13-year-old sister and the ladies of the Mismatch Society, though there is much they don't know. I won't get into my opinions of her brother and parents. Suffice it to say, they are not kind.

While Annalee's life has taken a dark and dangerous turn, Wayland's, by contrast, has become all that is prim and proper. Because of his Peterloo experience he's achieved his childhood dreams and become the darling of London society, who are all too eager to write his happy ending...one that decidedly does not include outcast Annalee. But, when a favor for his best friend, Annalee's brother, reunites him with his former love he slowly begins to realize that his best life is not what he imagined it to be. Will he be courageous enough to follow his heart?

Talk about hard-won happy endings. These two have all the cards stacked against them. At first, I thought Wayland would take the position of "rescuer" but he turned out to be much more complex than I had imagined, with a significant growth arc of his own.  Annalee, on the other hand, has an inner strength, core of kindness, and self-awareness that took me by surprise but that I greatly admired. At first, they seem to be polar opposites who could have no hope of finding happiness together but in reality they may turn out to be the only two people in the world who are able to understand, support, uplift, and love one another.

The secondary cast of characters in this book add a great deal of interest and complexity to the story. Favorites include Wayland's sister, Annalee's sister, and the always delightful - and somewhat bloodthirsty - Kearsley sisters. I'd happily read stories for all of them. I'll also be happy if I never see Wayland's mother, Annalee's parents, or her brother in a book again. There's going to have to be significantly more groveling there before I even think about forgiving them.

If you enjoy deeply-emotional historical romance with complex characters, some angst, some humor, and hard-won happy endings, give this one a try. In fact, read all three books in the series. I highly recommend them.