Review - - The Babe from Toyland 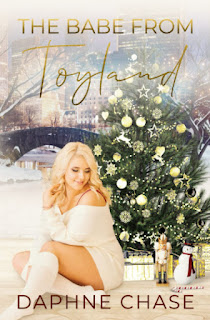 A DILF in need is a DILF indeedFive days before Christmas, with the biggest deal of his career on the line, the last thing Logan Fenton wants is to play happy effing family. His plans for a silent night implode when his ex-wife drops off their children for a surprise visit. He’ll move heaven and earth NOT to be the dad who ruins Christmas, but has no clue where to start. A trip to his neighborhood toy store provides the answers to his prayers, but the only package he wants to unwrap is Paige Piper, the plus-sized angel behind the counter, whose curves were meant for sin.All she wants for Christmas are a few days offBeing a special-ed teacher and part-time shop girl have given Paige Piper a very particular set of skills, but not enough money to pay off her student loans any time before retirement. When grinchy DILF Logan Fenton waltzes through Toyland’s doors and offers her a boatload of cash to be his nanny for the holidays, she had to agree. He might be a dad she’d like to F…but a Scrooge who outsources Christmas is on the naughty list, for sure.Christmas with kids in New York City should be a holly jolly journey through a winter wonderland. But once the children are nestled all snug in their beds, Logan and Paige can’t ignore the steamy heat between them, or how it begins to melt their icy hearts. Tis the season to be horny, but a relationship is on neither of their wish lists this year, even if love could be the miracle that leaves them questioning…Can this fa-la-la-la-ling turn into something more?
PJ's Thoughts:
What do you get when you blend the heart of a Hallmark holiday movie and the angst of a Lifetime drama with the steam of an erotic novel? You get Daphne Chase's debut, The Babe from Toyland. It's one wild ride that will tickle your funny bone, warm your heart, and have you reaching for a fan. Did I mention the steam? If explicit sex, graphic language, and the occasional kink aren't your jam, this might not be the book for you. But, if you choose to take a pass, you'll be missing so much more that this book has to offer.
Paige and Logan are wonderfully developed, complex characters. I loved Paige's innate kindness, her joy, her relationship with Logan's children, and her passion for her career as a special education teacher with a focus on neurodiversity. Chase illustrates that career passion, and kindness, in a restaurant scene within the book that is written with thoughtfulness and sensitivity. It's one of my favorite scenes in the book. I also enjoyed her sexual confidence, her openness in asking for - sometimes demanding - what she needs to find pleasure. I appreciated the exploration of both the positives and negatives between a couple willing to be open and inquisitive in the bedroom. As with all things, it's a learning process as Chase deftly conveys with her characters.
Where Paige is all sunshine, light, and capture the moment, Logan is work, work, work. He hasn't a clue how to connect with his children, throwing money at the problem when all they want is time with him. But he isn't a bad person; he truly believes that providing for them financially is what he's supposed to do. He loves his children, wants a better relationship with them, wants more than hot steam between the sheets with Paige. He just doesn't know how to accomplish that...until Paige shows him the way. Of all the characters in this novel, Logan has the greatest growth arc and his journey is the rockiest. There were times I wanted to kick him off a cliff and others when I just wanted to hug him. There are a few potholes of his own making along the way to his HEA but they make his evolution more believable and much more satisfying in the end.
I adored Logan's son and daughter! They are a huge part of this story, bringing humor, poignant emotion, kid wisdom, and a whole lot of heart to the table. Kudos to Chase for creating fully-developed, realistic child characters who enrich the story within a family unit without making it all about them. It's a fine balance and one she mastered.
If you like your heartwarming Christmas romances on the (very) steamy side, give The Babe from Toyland a try. It's a promising start to Daphne Chase's writing career.
Posted by pjpuppymom at 5:00 AM