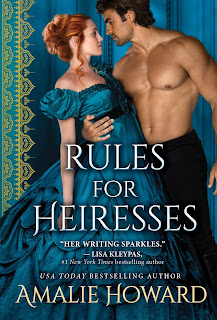 Born to a life of privilege, Lady Ravenna Huntley rues the day that she must marry. She's refused dozens of suitors and cried off multiple betrothals, but running away—even if brash and foolhardy—is the only option left to secure her independence.

Lord Courtland Chase, grandson of the Duke of Ashvale, was driven from England at the behest of his cruel stepmother. Scorned and shunned, he swore never to return to the land of his birth. But when a twist of bad luck throws a rebellious heiress into his arms, at the very moment he finds out he's the new Duke, marriage is the only alternative to massive scandal.

Both are quick to deny it, but a wedding might be the only way out for both of them. And the attraction that burns between them makes Ravenna and Courtland wonder if it'll truly only be a marriage of convenience after all...

I adored this book. It grabbed me from the first scene and held my attention to the very end. Howard has created a fast-paced story with an intriguing plot, layered characters, dastardly villains, and a hard-earned happy ending. It's filled with snappy banter, steamy chemistry, complex family dynamics, deep emotion that travels from fraught to sweet, and two childhood friends who, as adults, really seem destined for one another...even if it takes them a while to realize it.

I love a heroine who colors outside the lines and Ravenna certainly does that and more. When we first meet her she's disguised as a man, playing cards at a gaming establishment in Antigua after running from an unwanted suitor in London and stowing away aboard one of her brother's ships. She's smart, savvy, capable, and adventurous enough to defy the restrictions placed upon women of her time but has tender and vulnerable layers within her as well, especially as pertains to her evolving relationship with Courtland.

Talk about layers. Our hero has layers upon layers and has kept them tightly locked for the past decade or so. It's only when Ravenna comes crashing back into his life at the same time he's declared the new duke that fissures begin to appear, allowing some of those deeply-held emotions and vulnerabilities to surface even though he fights it every step of the way. He's a ruthless, highly successful businessman with a suppressed sweetness at his core. I really loved his evolution.

As with her previous book, The Princess Stakes (Ravenna's brother Rhystan and Princess Sarani Rao), Rules for Heiresses features a biracial lead character (Courtland) and the impact of his parentage both within his family and society at large. Howard draws on a lot of her own personal experiences in creating this character and it shows in the authenticity of both Courtland's own feelings and how he's perceived, and treated, by others. One of the facets of Ravenna's character that I most enjoyed was how she sees him as a whole person, judging him on his actions rather than his appearance, and embracing all parts of him. The ballroom scene where she confronts someone who is not his ally is one of my favorites in the book.

Rules for Heiresses can absolutely be enjoyed as a standalone novel. However, characters from The Princess Stakes have key roles in this new book and reading the previous one (either before or after) will only enhance one's enjoyment and understanding of all the characters. I enthusiastically recommend them both.

I don't know what Howard has planned next but I'm fervently hoping she has plans to return to this world. Courtland's half-sister is begging for a story of her own. And I'm begging on her behalf.

Do you enjoy heroines in disguise? Do you have any favorites?

Have you read Amalie Howard yet?

One person who posts a comment before 11:00 PM, November 5 will receive a print copy of Rules for Heiresses.