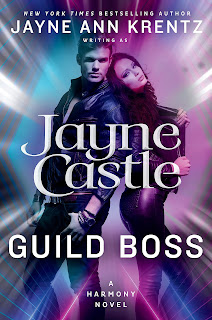 Living in this new, alien world doesn’t stop the settlers from trying to re-create what they’ve left behind. Case in point—weddings are still the highlight of any social calendar. But it’s the after-party that turns disastrous for Lucy Bell. Kidnapped and drugged as she leaves the party, she manages to escape—only to find herself lost in the mysterious, alien underground maze of glowing green tunnels beneath Illusion Town. She’s been surviving on determination and cold pizza, scavenged for her by a special dust bunny, when help finally shows up.  Gabriel Jones is the Ghost Hunter sent to rescue her, but escaping the underground ruins isn’t the end of her troubles—it’s only the beginning. With no rational reason for her abduction, and her sole witness gone on another assignment for the Guild, whispers start circulating that Lucy made it all up. Soon her life unravels until she has nothing left but her pride. The last thing she expects is for Gabriel Jones to come back to town for her. The Lucy that Gabriel finds is not the same woman he rescued, the one who looked at him as if he were her hero. This Lucy is sharp, angry, and more than a little cynical—instead of awe, she treats him with extreme caution. But a killer is still hunting her, and there aren’t a lot of options when it comes to heroes. Despite her wariness, Gabriel is also the one person who believes Lucy—after all, he was there. He’s determined to help clear her reputation, no matter what it takes. And as the new Guild Boss, his word is law, even in the lawlessness of Illusion Town.
PJ's Thoughts:
I don't read a lot of paranormal romances, especially those set in the future, but I always make time for books set in the Harmony universe. I discovered this series about 20 years ago and was immediately captivated by this place in a faraway galaxy that was settled by explorers from Earth 200 years ago; explorers who were left stranded when the curtain between their worlds closed. Castle brings it all to life so vividly, so realistically, that it's easy to believe that Harmony, with all its psychic and paranormal activity, actually exists.
Guild Boss is the newest installment in this long-running series and while it's the 15th Harmony book it is also a great place to jump in if you're new to the series. The story is intriguing, capturing my attention immediately and keeping me engaged until the end. Castle (who also writes as Jayne Ann Krentz and Amanda Quick) is no stranger to complex, well-developed characters or tightly-woven mysteries. Both are on display here.
Lucy and Gabriel had no trouble at all engaging my interest and my affection. I loved the chemistry, the banter, the friction, and the respect that develops as they work together in an attempt to discover what really happened to Lucy and how it ties in with other mysterious events. There's also a sweetness between them that had me firmly in their corner, cheering them on. I appreciated the fact that Castle made Gabriel work hard to earn her trust first though. Let's just say that their initial encounter left Lucy reluctant to give him another chance. With good reason.
Castle's ability to create an interesting cast of secondary characters who enrich the story without detracting from the main couple is another skill that ramps up my enjoyment of her books. Of course, the star of the show is Otis, Lucy's dust bunny pal. The romance between Gabriel and Lucy tugged at my heart, the twists and turns of the mystery kept me guessing until the reveal, the action kept me riveted to the pages, and the well-placed wit and humor elicited more than a few chuckles, but let's be honest...it's the dust bunnies who keep me coming back. I adore them!
Whether you're a long-time fan or new to the series, Guild Boss is a great place to dip your toes into Castle's psychically-charged world of ghost hunters, dust bunnies, weather channelers, and did I mention dust bunnies? I highly recommend a visit to Harmony for your fall reading schedule.
Posted by pjpuppymom at 5:00 AM