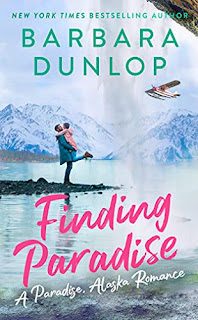 Accomplished Los Angeles lawyer Marnie Anton has always been sensible, but when her friend Mia Westberg asks for help with a ridiculous matchmaking project, she can't say no. The idea of transporting city girls into the small town of Paradise, Alaska, is so crazy it just might...work? Against her best judgment, she tags along. Having grown up in a family of intimidating men, Marnie developed a preference for the urbane lawyers and clients in her life in LA. But when she meets a mountain of a buff Alaskan man with an intriguing snake tattoo, intimidated is definitely not the first thing she feels.Conrad "Cobra" Stanford was skeptical of the matchmaking event from the start. Big-city women weren't adventurous, they were judgmental. They'd take one look at him and scorn his lifestyle, just like his first love did. Cobra planned to give the women a wide berth, but one of them won't be ignored. Marnie's everything that's wrong and everything that's right for him all at the same time. Just when he thinks he's got her pegged, she blindsides him with a startling past, falling into his arms and igniting his protective instincts and so much more....
PJ's Thoughts:
Alaska seems to be the setting of choice for contemporary romances lately and I'm okay with that. I love the rugged country, the pioneer spirit, the wildlife, and pretty much everything else that goes along with life in our 49th state.
This was my first Barbara Dunlop book. I will definitely be reading more, beginning with book one of this series: Match Made in Paradise. You don't have to have read that book in order to enjoy Finding Paradise but Mia and Silas pulled me in and left me wanting to experience their story too.
Dunlop's characters are all well developed and intriguing. There are already several secondary characters from Finding Paradise that I'm eager to know better. As for the main couple of this book, I was intrigued with Marnie and Cobra from the get-go and thoroughly enjoyed them. Much of their journey is filled with fun, adventure, and sizzle but they also both turned out to be more complex than I had anticipated. I appreciated the depth that the past - and current - situation with Marnie's family brought to her character and how it influenced her decisions. And she wasn't the only one dealing with difficult family dynamics. In the end, both Marnie and Cobra had very satisfying growth arcs. I was in their corner all the way and happy with the conclusion to their story.
With going into spoiler territory, I will also say that I'm keeping my fingers crossed for a story featuring a person close to Marnie who - like her - deserves a chance for a happy ending.
If you enjoy small-town romance with adventure, rugged men, strong women, and hard-won happily-ever-afters, give this series a try. I'm already looking forward to my next visit to Barbara Dunlop's Paradise, Alaska.
Posted by pjpuppymom at 5:00 AM