Review - - An Heiress's Guide to Deception and Desire 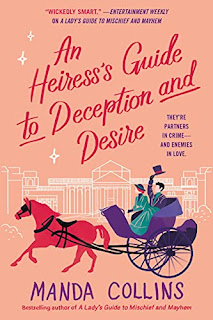 England, 1867: As half of the writing duo behind England’s most infamous crime column, Miss Caroline Hardcastle has quite the scandalous reputation. It may have cost her a fiancé, but she would much rather bring attention to crimes against those ignored by society than worry about what the ton thinks of her.After Caro’s dear friend is kidnapped, however, she has no choice but to work with Lord Valentine Thorn, the same man who broke her heart. Worse, when her actions put her father’s business at risk, a marriage of convenience may be her only solution . . . but can she trust Val to stand by her? Or will their past repeat itself?Val—the new Viscount Wrackham—is in an untenable position: His father is demanding he find a respectable bride to secure the succession. Yet the only woman he’s ever loved, Miss Caroline Hardcastle, is notorious for behaving improperly. And she’s never forgiven him for his youthful transgressions, missteps made in the name of familial duty, but ones he still regrets to this day.As they grow closer to unmasking the culprit, Val sees an opportunity to show Caro he’s a changed man. But can he convince her to give their love a second chance—before death does them part?
PJ's Thoughts:
I enjoy a mix of mystery with my romance and Manda Collins is one of my favorite authors skillfully blending the two in a historical setting. As with the first book in this series, A Lady's Guide to Mischief and Mayhem, Kate and Caroline are at the heart of another crime, this time the disappearance of a talented actress who also happens to be a dear friend; a friend who happens to be secretly betrothed to the cousin of the only man Caro has ever loved. The man who broke her heart.
Collins uses one of my favorite tropes, second-chance romance, with a bonus of enemies to lovers, in this book and I am there for it. There's emotional baggage to unpack, opportunities for growth, witty banter, and just plain fun as Caro and Val reconnect. I like that Collins goes slow with them and doesn't rush their romantic reunion. Deeply emotional issues need to be addressed, between Val and Caro as well as within each of their families. Watching Val evolve, take ownership of his feelings, and control of his life is immensely satisfying and makes forgiveness, when it's finally given, all the more sweet. Caro has a necessary growth arc as well, with the deeper understanding of her parents, especially her father, especially poignant. These are well-developed characters with layers that give them depth and make them interesting.
On the mystery side of the book, Collins once again crafts a tightly-woven scenario with well-placed twists and turns that keep me guessing pretty much right up until the reveal. That aspect of her storytelling adds additional depth that always keeps me flipping pages.
An Heiress's Guide to Deception and Desire is unabashedly feminist while still staying true to the time and place in which it is set. I thoroughly enjoyed watching Caro take the reins (both figuratively and literally) in her pursuit of justice as well as love. There are definitely no wilting lilies among this group of female friends. I've thoroughly enjoyed the first two books of the series and am already giddy with anticipation for the next, especially if the two secondary characters who practically set the room on fire with their sparks in this book are ready to take center stage in book three.
Posted by pjpuppymom at 5:00 AM