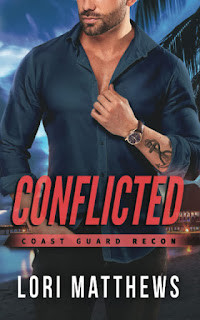 Meet Elias Mason of the US Coast Guard’s TEAM RECON. As in reconstructed. As in broken and needs fixing.

Team RECON has a new headquarters now—Miami, Florida, which also happens to be Elias’s hometown. He’s been avoiding his past like the plague, but there are some things you can’t outrun. Like the death of his best friend, his past involvement with the local gang, and his first love, Andrea Torres.

Andrea has been on a path of vengeance for years. Now an agent with the Bureau of Alcohol, Tobacco, Firearms and Explosives, Andy is determined to take down Santiago, the main runner of guns, money, and drugs in Miami, and the man who killed her sister. Her current undercover assignment has her so close to caging Santiago, she can taste it.
To stay on top, Santiago has to turn to buying guns from the Russians and selling them to militia groups. Elias and Andrea will need to bury their animosity and ignore the fiery chemistry between them to run a game of deception as insiders for Santiago.
Pretending to be the couple they once were in order to bring their common enemy to justice would work if only the Russians didn’t have other plans.
PJ's Thoughts:
Talk about conflict; this book is steaming with it! Lori Matthews continues her string of intense, tightly-woven, suspense novels with another page turner that I devoured in one sitting.
First of all, I loved the setting. Matthews really captures the South Florida vibe, placing me squarely in the center of her lush, tropical section of town that teems with diverse neighborhoods and pulsing nightlife while barely hiding a drug-infested, life-or-death underbelly. The essence of cut-throat criminals and the agents determined to take them down led me on an edge-of-my-seat journey with my heart in my throat most of the way. And the twists. So many twists!
Then there are the human characters. Matthews really excels at creating complex, multi-layered characters who pull me in, engaging my emotions even when I fight against it. She makes them relatable, intriguing, and gives them nuances in shades of gray. In short, she makes them feel real. I connected with Elias and Andrea almost immediately, even though they were enemies at the start, both having good reason to mistrust the other. There's that conflict again. Matthews leads them through a complicated and difficult journey, both physically and emotionally. The suspense/action/danger of their joint mission takes the lead but their emotional evolution was not overlooked. Only with growth (on both of their parts) would a reconciliation be possible. Only with communication and deep introspection could soul-baring apologies be offered...and accepted.
This is the third book in Matthews' RECON series. All of the team members are present in this story though the teams' mission and Elias and Andrea's romance are both begun and concluded within the book. This is a series where we see all the team members in each book but each book really does stand on it's own. Although I prefer to read books in order, I do think readers would be able to start anywhere and not feel confused or as if they were missing vital information. Having said that, I do recommend all three books currently published and am already eagerly anticipating more.
COAST GUARD RECON:
Diverted
Incinerated
Conflicted
Posted by pjpuppymom at 4:00 AM