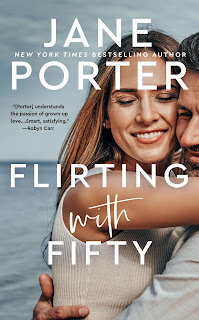 A sexy and sparkling later-in-life contemporary romance about a woman who leaps out of her comfort zone and takes a chance on love by New York Times bestselling author Jane Porter.Paige Newsom is finally at a place in her life where she’s comfortable. She loves her job as a college professor in Southern California, lives close enough to her mother to visit her regularly, and has three daughters who are flourishing in their own careers. Paige has no plans to upend her life again after her divorce eight years ago, but she’s about to embark on a new adventure: co-teaching a course that includes a three-week international field study. Paige can think of a dozen reasons why she shouldn’t go, one being a dazzling Australian biologist who will be teaching alongside her. Professor Jack King is charismatic, a world traveler, and more like Indiana Jones than Indiana Jones, all of which unsettles Paige, who prides herself on being immune to any man’s charms. She isn’t looking for love, and it turns out, neither is he. But as the two co-professors lead the rigorous program together, first on campus, then in beautiful Tanzania, their biggest challenge will be working closely together while resisting the undeniable chemistry they feel when they’re with each other.
PJ's Thoughts:
Are you, like me, a reader of "a certain age" aching for romances featuring characters with some life experience? Characters who think they've reached the age where new love is a closed door rather than an exciting rainbow of possibilities? Characters so firmly entrenched in their comfort zone that the thought of trying something new sends their anxieties into a tailspin, if it even occurs to them? Characters who discover it's never too late to open your mind - and heart - to the joys of new beginnings? If any of these pique your interest, do I have a book for you!
Flirting with Fifty is a gem of a story that I didn't want to put down. These characters were so well developed and relatable. I wanted to be friends with Paige...and Jack! I was immediately invested in them, their relationship, and their futures...hopefully, together. Porter used a deft hand in creating them, balancing hopes and fears, old regrets and new possibilities. She didn't shy away from the emotional baggage both carried and how that affected their abilities to move forward, how it impacted the way they viewed relationships. Their journey was a slow burn that felt realistic and appropriate for where they were in their lives, especially for Paige. I loved the friendship that developed between them, the mutual respect, the caring. I especially appreciated Jack's responses to Paige's insecurities and doubts. I also enjoyed how their family relationships and friendships were interwoven into their romantic journey. Again, so realistic and relatable for a couple in their fifties, with adult children, and complicated relationships in their past.
The scenes in Tanzania were some of my favorites in the book. Porter's descriptions brought the scenery, culture, animals, and people of that country to life for me. And the unexpected impact the trip had on Paige had me reading, and rereading, passages as my heart twisted, then bloomed, with the incredible depth of emotion. So many feelings.
Porter will be returning with another "mature" romance this fall when secondary character, Andi, widowed for five years, has a chance for a second love with grumpy military vet, Wolf. The excerpt at the back of Flirting with Fifty has me drooling in anticipation and the cover? Yes, please! Flirting with the Beast is scheduled to be released November 29, just in time for some snowed-in-forced-proximity Christmas reading fun.
Posted by pjpuppymom at 4:00 AM