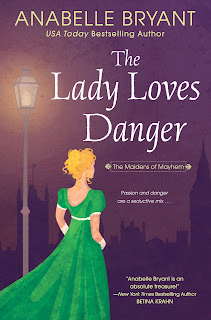 The society of daring women known as the Maidens of Mayhem dedicate their lives to protecting London’s most vulnerable citizens from injustice. Daring and discreet, their missions lead them to people and places they least expect, often putting their lives—and their hearts—in peril . . .Lady Delilah Ashbrook is tirelessly searching the streets of London for a boy who vanished while under her care. Suspecting the child was abducted to be sold, Delilah hopes the Maidens can help find him before it’s too late. But Delilah’s mission brings her into the crosshairs of a mysterious man who is also looking for the boy. Sebastian St. Allen certainly cuts a dashing figure. But is he hoping to save the child—or harm him?Sebastian has his own reasons for protecting the less fortunate. He has a gift for seamlessly navigating both London’s darkest corners and its most elite circles. But nothing prepared him for Delilah, whose delicate beauty belies an independence and sensuality he finds irresistible. Sebastian knows they can help each other if only she’ll let her guard down.  And as they become entrenched in danger, they realize how strong their ties have grown—and how much they need one another . . .
PJ's Thoughts:
I enjoyed this second book in Anabelle Bryant's Maidens of Mayhem series. It's another fast-paced story with plenty of suspense, adventure, and romance.
Delilah tugged my heartstrings from the get-go. I loved her determination, her bravery, her willingness to do whatever it took to find a little boy snatched in broad daylight. Sebastian won my heart right along with Delilah's. He was so supportive of her in her quest; determined to keep her safe by teaching her how to keep herself safe. They were likeable, well-developed characters who engaged both my interest and my emotions. I loved them individually and as a couple. I appreciated the respect that developed between them as they worked together and the slow-burn romance that deepened as they came to know one another better. I loved their chemistry, passion, and sparkling banter.
I wish the Maidens of Mayhem had been more present in this story. I very much enjoyed them in the first book and would have liked to have seen more of them in this one. But that's a small quibble.
The secondary characters were also well developed and added to the progression of the story, as well as the conflict. Young Oliver was a special delight.
I figured out the mystery about halfway through the book but there were still surprises that kept things interesting. And a romance to keep me flipping pages.
Though the Maidens of Mayhem appear in both the first and second books, each can be read as a standalone and in any order. I'll be back for more of Anabelle Bryant's Maidens of Mayhem.
Posted by pjpuppymom at 4:00 AM