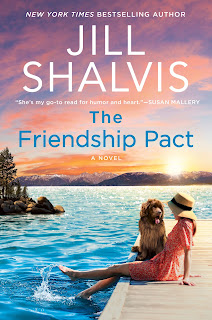 Alone in the world, Tae Holmes and her mother April pretty much raised each other, but as Tae starts asking questions about the father she’s never met, April, for the first time in her life, goes silent. To make matters worse, Tae is dangerously close to broke and just manages to avoid financial meltdown when she lands a shiny new contract with an adventure company for athletes with disabilities and wounded warriors.

Her first big fundraiser event falls flat, but what starts out as a terrible, horrible, no-good night turns into something else entirely when Tae finds herself face-to-face with Riggs Copeland. She hasn’t seen the former Marine since their brief fling in high school, and while still intensely drawn to him, she likes her past burned and buried, thank you very much. Hence their friendship pact.

But when April oddly refuses to help Tae track down her father, it’s Riggs who unexpectedly comes to her aid. On a hunt to unlock the past, the two of them find themselves on a wild ride and learn a shocking truth, while also reluctantly bonding in a way neither had seen coming. Now Tae must decide whether she’s going to choose love … or walk away from her own happiness.

PJ's Thoughts:
So many layers. So many feels. This is a romance, yes, but also much more. Shalvis seamlessly weaves together multiple relationships and plot threads into a story that pulled me in and kept me eagerly turning pages. I loved the slow-burn, second-chance romance between Riggs and Tae but the various family relationships were just as impactful.
I enjoy couples who share a significant moment as teens then go their separate ways, only to be unexpectedly reunited years later, especially when weighty baggage is being carried by both. I enjoyed the fact that both Tae and Riggs were complex, flawed characters. The chemistry that had ignited between them was still there but the road forward was filled with emotional potholes. Shalvis made them work hard for their happily ever after. I loved it.
The family relationships in this book were a vital part of the makeup of Tae and Riggs. Tae's co-dependent relationship with her mother, a woman only 15 years older and still searching for her identity, was a critical piece of Tae's evolution as well as April's (her mother). April's journey, decisions she made as a teen, and the fallout when an unexpected character enters the picture, were important parts of the story that impact April, Tae, and even Riggs.
Then there's the relationship between Riggs and his brother, a landmine of emotions with a troubled history but love at its core. Shalvis nailed the dynamic between the brothers, the antagonism, the guilt, the tenuous unspoken hope, and the love that won't be denied.
Some of my favorite parts of the story were scenes involving the company co-owned by Riggs and his brother, an organization that offered recreational opportunities and hope to injured veterans and at risk youth. Shalvis brought each of the characters in those scenes to vibrant life, engaging my emotions and making me want to sign up to volunteer today. I love how she makes me care deeply about even secondary characters.
The Friendship Pact is the second book in the Sunrise Cove series but, really, the only connection between the two is the setting of Lake Tahoe. The books stand completely on their own and can be read in any order. Add this one to your summer reading list. I highly recommend it.
Posted by pjpuppymom at 5:00 AM