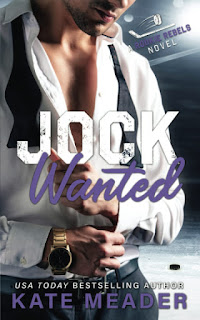 When the new general manager of the Chicago Rebels tasks Tara Becker with faking it with one of his players to help clean up the naughty jock's act, she's all over it. She'll make that misbehaving hunk of muscle look good and get her dream guy into the bargain.

Only the path from fake to real is riddled with thorns . . .

New Rebels GM Hale Fitzpatrick thinks ditzy blonde and wannabe WAG Tara is the perfect solution to his PR problem - until she isn't. Soon Fitz realizes that maybe he doesn't have control of the strings after all . . . especially when he starts to fall for his pretty little puppet.

A fake relationship hockey romance - with a twist!

PJ's Thoughts:
There's a reason Kate Meader is an auto-buy for me. It doesn't matter how many times she returns to a place (Chicago), an organization (the Rebels), or a group of characters (hockey playing teammates), each story in the original Rebels series as well as the subsequent Rookie Rebels series is fresh, engaging, and addictive as all get out.
I'm fascinated by those one-dimension, (seemingly) throwaway secondary characters who change the rules when they hit the page. That's the impression Tara made on me when first introduced in Foreplayer (Rookie Rebels - Book 4). But gradually, over time, she has shown glimpses of being more than a one-note gold digger and made me begin to wonder if, possibly, there could be more to her than we know? It all comes full circle in Jock Wanted as Meader skillfully begins to unveil the layers and secrets that give this intriguing character the depths that no one imagined. From scorned girlfriend to gold-digging hockey groupie to solid friend, savvy businesswoman, and fully-dimensional character I was happy to root for, Tara is the highlight of this series that I wasn't expecting...but am oh, so happy Ms. Meader gave us!
Then there's Fitz, or Hale, as only Tara calls him. ::deep sigh:: Could the author have created a more perfect counterpart for Tara? I don't think so! What a kind, considerate, sexy man he is at his core. These two gave me so much joy during their up-and-down, push-and-pull journey. The chemistry, the friction, the snappy banter, the confusing attraction, the yearning, the caring, the steam. Oh yes, the steam. So good!
Of course, other Rebels and their partners weave in and out of the story, supporting, meddling, gently nudging, and otherwise helping the story progress. It's always fun when these characters get together. I love catching up with them and there's always plenty of humor but I also appreciate that while Meader allows them to enhance the story, she doesn't allow them to distract from the main couple. This is most definitely Fitz's and Tara's story. I loved it.
Jock Wanted is the seventh book in Kate Meader's Rookie Rebels series. It can be enjoyed as a standalone but I feel readers will have a better understanding of Tara, her relationships with others, and her growth as a character if they have at least read Foreplayer (book 4).