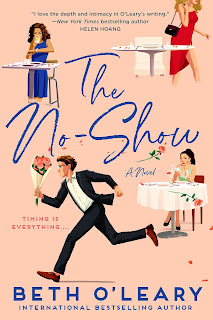 Three women who seemingly have nothing in common find that they're involved with the same man in this smart new rom-com by Beth O'Leary, bestselling author of The Flatshare.

Siobhan is a quick-tempered life coach with way too much on her plate. Miranda is a tree surgeon used to being treated as just one of the guys on the job. Jane is a soft-spoken volunteer for the local charity shop with zero sense of self-worth.

Once they've each forgiven him for standing them up, they are all in serious danger of falling in love with a man who may have not just one or two but three women on the go....

Is there more to him than meets the eye? Where was he on Valentine’s Day? And will they each untangle the truth before they all get their hearts broken?

The premise sounded amusing–I had to wonder how the author was going to redeem a hero who looked to be stringing along 3 different women–but the reality is much different. Beth O’Leary is also the author who wrote The Road Trip (which I reviewed but didn’t care for as much as this one.) O’Leary is known for being quirky in her writing style, having complicated characters–some of which really struggled to be likable on the page, and being the sort of rom-com that is more like 4 Weddings and a Funeral rather than like When Harry Met Sally or The Lost City. They’re cerebral British rom-coms, which in my mind also means there’s quite a bit of time where I’m more depressed than laughing at any antics. But I can say: it all does work out in the end.

As for characters, I think I may have liked Carter (the hero) least. Again, once you get to the end, you understand his behavior, but 352 pages is a long time to not really understand why a hero is behaving as he does. My favorite characters were Miranda and AJ–and for them, I would recommend the book. Jane–for me–was very relatable as a character, but others may find her weak; and Siobhan was far too diva-ish for my blood. This said: they were all very well-drawn characters that were memorable and distinct; and the book revolves through the POVs of the three women, so the pacing definitely left the reader turning the page to see what happened next.

Turn offs for me as a reader fell to two things: First, present tense writing format a la Bridget Jones. I cannot get into it half the time and I find it too easy to put the book down. Life is too short for me to put down a book this often. I want to be immersed in the story. I want to come out of reading, wondering what day it is and melancholy that the book has ended and I have to find something else. I get that most from third person past tense style of writing. Second, I only consider it a rom-com beach read if no one dies in the book. This story failed that test. So if you happen to also be a person who does not want to combine their rom-coms with death (especially if death is not alluded to in the blurb), you have now been warned.

After reading this you may wonder, “But, Hellie, you gave this 4 stars.” Yes, I did. For me, it would fall more into 3 ½ stars, but as far as plot, characterization, writing, pacing, et al went, Beth O’Leary is really good at what she does. It just happened to be the kind of story that I don’t prefer as much–which reflects my rating. I have a very specific classification for rom-coms, but rom-coms, I believe, fit a much broader scope than I usually like to attribute. See: 4 Weddings and a Funeral.