It Takes a Villa
by Kilby Blades
Publisher: Entangled: Amara
Release Date: May 24, 2022
Reviewed by Hellie 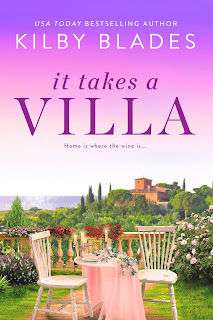 For the reasonable price of $1, Natalie Malone just bought herself an abandoned villa on the Amalfi Coast. With a detailed spreadsheet and an ancient key, she’s arrived in Italy ready to renovate—and only six months to do it. Which seemed reasonable until architect Pietro Indelicato began critically watching her every move…
From the sweeping ocean views to the scent of the lemon trees, there’s nothing Pietro loves more than his hometown. And after seeing too many botched jobs and garish design choices, he’s done watching from the sidelines. As far as he’s concerned, Natalie should quit before the project drains her entire bank account and her ridiculously sunny optimism.

With Natalie determined to move forward, the gorgeous architect reluctantly agrees to pitch in, giving her a real chance to succeed. But when the fine print on Natalie’s contract is brought to light, she might have no choice but to leave her dream, and Pietro, behind.

Hellie’s Heeds
Part Under the Tuscan Sun and part Money Pit, this contemporary romance blends romance, humor, poignancy, and HGTV renovations into a happy beach read. Natalie, the heroine, is both starting over and fulfilling her grandmother’s dying wish, to live and thrive in Italy. She has big plans for the huge DIY project she has picked for herself, wanting to invest her small nest egg into creating a B&B out of a beloved old Italian inn. Pietro is the poor beleaguered son of his father, the mayor, of this town who has started this program of “selling” DIY renovations for one euro, giving hopeful ex-pats (or really anyone with the necessary 75,000 euros to try) a chance to create a life in Italy. Pietro is an architect who has constantly warned the council his father sits on that this program is not sustainable; and when he meets the hopeful (and somewhat desperate) Natalie who plans to renovate a huge villa all by herself in six months, his concerns only seem more validated.
Natalie meets other “hopefuls” in the program; and soon she finds camaraderie in all the expected and unexpected pitfalls of DIYing an old house. Pietro–drawn to Natalie despite himself–finds himself pitching in to help her, especially when he learns more about her plans for the villa and that her changes to the place are fitting for the theme of the project. They grow closer with each project, but their young relationship is threatened when one of the DIY houses’ collapses and the town council has to re-evaluate the project and then re-inspect each place and give specific instructions for tenants to repair in order to meet the terms of the agreement. Natalie finds she only has 30 days to make repairs she can no longer afford. And the man who has been helping her, Pietro, seems to have had his own agenda the whole time. It takes Pietro all his efforts–and those of the villa–to win her back.
I think what I liked most about this book was the theme (so to speak) of looking forward and letting go of things that no longer serve you. As someone who struggles a lot with letting go, I found one of the scenes in this book particularly poignant and made me stop to think, “Ah, yes, wisdom.” I love when my romances do that. I think in nearly all the romances I’ve read, there’s at least one of those scenes. They’re why I like to read romances, really. I mean the romance is great–but the little fortune cookies of wisdom? I love that. The other thing I loved about the book was the lemons. I swear more than once this book sent me on internet searches about lemons–and I’m now determined one day, when I’m a homeowner, I will have a lemon tree. But I also just want to go to Italy and enjoy their lemons. This book felt very much a love letter to the region, which I enjoyed.
If I had to critique–and this is probably just me–I didn’t always connect with the characters per se with their love scenes. (I tended to gloss over them or stop and try to figure out why I was glossing over them.) Again, like humor, love scenes are subjective. Or it could be that I didn’t connect with the hero and heroine so much that I was particularly engaged when their love scenes rolled around. While I like Natalie and Pietro a lot–both very thoughtful and giving characters with real flaws that I could relate to, maybe it was that I didn’t quite understand their connection. I don’t know. I just know it was the reason I couldn’t quite give this a 5 star from me. Again, I think ratings are rather subjective.

But if you loved Under the Tuscan Sun as I did and if you are tolerant of knowing a bit too much about home renovations (i.e. it will dull any desire you may have had to DIY your own house), you will absolutely want to lose yourself in the story about the Italian coast, lemons and limoncello, and a villa who comes together for the benefit of all the inhabitants.

Posted by pjpuppymom at 5:30 AM