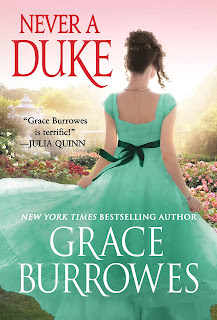 Ned Wentworth will be forever grateful to the family that plucked him from the streets and gave him a home, even though polite society still whispers years later about his questionable past. Precisely because of Ned’s connections in low places, Lady Rosalind Kinwood approaches him to help her find a lady’s maid who has disappeared.Rosalind is too opinionated—and too intelligent—and has frequently suffered judgment at the hands of polite society. Despite her family’s disdain for Ned, Rosalind finds he listens to her and respects her. Then too, his kisses are exquisite. As the investigation of the missing maids becomes more dangerous, both Ned and Rosalind will have to risk everything—including their hearts—if they are to share the happily ever after that Mayfair’s matchmakers have begrudged them both.
PJ's Thoughts:
Ned Wentworth has to be one of the most endearing heroes I've ever read. I adored him. And that's without experiencing his back story in the first six books of the series. I can only imagine how much deeper my affection for this character will be once I've read those other books. And I will be reading them! Meeting the couples from the earlier books in Never a Duke has guaranteed that.
It was going to take a strong, special heroine to convince Ned that he deserved a happy ending and Rosalind was just that. I loved how her values lined up with his. I loved the chemistry and banter between them. Burrowes' dialogue simply sparkled and there was plenty of it. These two talked, often, and about a variety of topics from the lighthearted to the deeply emotional. It was a wonderful way for them to get to know one another while working to find the missing maids, unveiling hidden depths - and surprises - about each of them. I loved the respect between them, the genuine affection (they liked each other), Ned's determination to protect Rosalind, and the way she supported and defended him. I loved how she defended him!
Secondary characters were plentiful in this book with Ned's adopted family members (meddling but good people) sharing the spotlight with Rosalind's greedy, cold-hearted ones. I do love a well-developed villain and Burrowes gave readers one in particular who was easy to despise.
Never a Duke is the final book in a seven-book series with many characters from the earlier books having significant page time in this last story. Kudos to the author for creating a story that never left me confused or out of the loop. Instead of feeling like I was missing something, meeting the earlier couples so important to Ned's life only made them more intriguing, and me more eager to read their stories. Speaking of which... 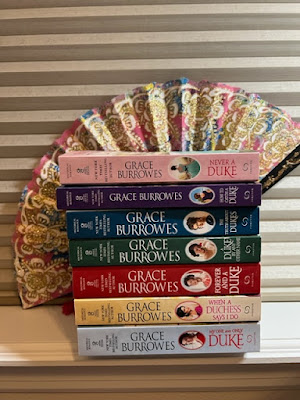 Do I have an incredible giveaway for you! Grand Central Publishing (Forever) has generously offered print copies of all seven books in this series to one person who posts a comment before 11:00 PM, June 22. If the first six books are even half as good as the seventh, they will be incredible.
*U.S. only
*Must be 18
*Void where prohibited
So, tell me...
Have you read any Grace Burrowes books yet?
Do you read a series in order or jump in wherever is most convenient?
Who is the last hero who captured your affections or the last heroine who had you cheering?
Posted by pjpuppymom at 2:00 AM