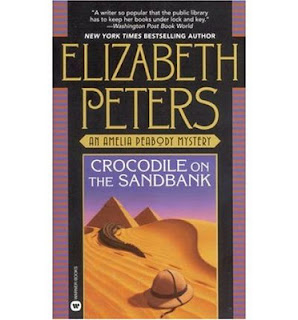 In September on Second Helping when I was talking about the marvelous SOULLESS by Gail Carriger, I mentioned how Alexia Tarabotti and Lord Maccon reminded me of Amelia Peabody and Radcliffe Emerson from CROCODILE ON THE SANDBANK by Elizabeth Peters. You can find the SOULLESS review here: http://www.theromancedish.com/2011/09/soulless-has-soul.html I thought it might be fun to visit the dangerous, dramatic, romantic Egypt of Amelia and Emerson today.

Although CROCODILE ON THE SANDBANK is billed as an Amelia Peabody mystery, I'd firmly put this book in the romance camp. There is much mayhem and derring do but the main thrust of the story is the funny, awkward, touching relationship that develops between two clever, prickly, self-willed people who long ago decided romantic love will never be part of their lives.

(I am informed, by the self-appointed Critic who reads over my shoulder as I write, that I have already committed an error. If those seemingly simple Enlgish words do indeed imply that which I am told they imply to the vulgar, I must in justice to Evelyn find other phrasing.)

In justice to myself, however, I must insist that Evelyn was doing precisely what I have said she was doing, but with no ulterior purpose in mind. Indeed, the poor girl had no purpose and no means of carrying it ouf it she had. Our meeting was fortuitous, but fortunate. I had, as I have always had, purpose enough for two.

You immediately know that you're reading a book written in the high Victorian style (Reader, I married him!). You can also tell that you're in for a lot of fun - and that's true as well. One of the great pleasures of this book is the sly humor.

Purpose enough for two describes bluestocking spinster Amelia Peabody to a T. She's a lovable monster who inherits a fortune from her vicar father and sets out to see the world on her own terms. She's self-willed, self-confident, pushy, but kind-hearted, generous and often perceptive When she crosses swords with shaggy, cranky archaeologist Radcliffe Emerson who until now has only been interested in women dead for 3,000 years, unexpected sparks fly. It's a joy watching these two clever people maneuver around each other and then find themselves maneuvered into a lifelong passion.

The story is a bit silly but that's part of the fun too. When Amelia rescues ruined and forsaken runaway heiress Evelyn Barton-Forbes from a curious Italian crowd at the Forum in Rome and decides to employ her as a companion on her voyage to Egypt, little does she know the adventures in store. Passion, cads and bounders, danger, cobras, stalking mummies, native superstitions and more await our intrepid heroine before she gets her happy ending.

As befits a story published in 1975, this book falls into the old-fashioned romance category. There's no explicit sex and the passion is mostly constrained behind stiff upper lips. Which makes it surprisingly powerful when it does escape! But the story is clever and witty and packed with incident and as I said, the romance is great fun. Not only that, but Evelyn finds romance too so you get two love stories for the price of one. What more could a budding Egyptologist want?

I've always had a very soft spot for books set in the late 19th century in Egypt. Two of my all-time favorite romances are AS YOU DESIRE by Connie Brockway and MR. IMPOSSIBLE by Loretta Chase. This one forms an honorable third in that glorious list. Seriously, if you want a couple of hours of sheer enjoyment, pick up CROCODILE ON THE SANDBANK.

Do you like playing in exotic climes when you read romances? Do you like intellectual heroes? Who's your favorite feisty heroine? Have you ever been chased by a mummy (the bandaged not the maternal kind)? Did you manage to escape?

HAPPY THANKSGIVING!
Posted by Anna Campbell at 12:02 AM