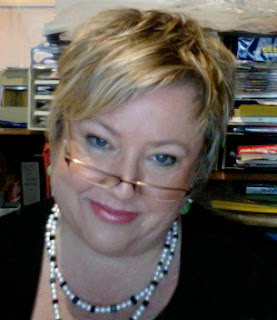 Janga and I discovered early on in our cyber friendship that we share a similar taste in books so I didn't hesitate when, about six years ago, she strongly encouraged me to try one of her favorite historical romance authors; a writer by the name of Anne Gracie.  The first Gracie book I bought was The Perfect Kiss (fourth in the Merridew Sisters series) and with that one book I was hooked on this exceptionally talented author.  I've since read almost everything she's written (I recently scored Tallie's Knight, a book I've been relentlessly searching for the past six years) and can honestly say she's never disappointed me.  I had the pleasure of meeting Anne in person at the RWA National Conference in 2009.  Just as she had become one of my favorite authors with that first book, it took just one meeting for her to become one of my favorite people.  This irrepressible Aussie exudes warmth, humor and joy - an unbeatable combination.  Please join me in giving Anne a very warm welcome to The Romance Dish! ~PJ

Where do you get your ideas?

It's a question often asked of authors, and most writers hate it. Not me.  I get ideas for stories all the time - there's no shortage. They come from all kinds of places — a snippet of overheard conversation, an image, a scene in movie or a book where I think, "No, it wouldn't have happened like that," and an idea is sparked.

But most often stories come to me just as I'm drifting off to sleep, or just as I'm waking in the morning. A scene starts rolling in my head like a movie and depending on my state at the time, I'll either scribble it down into the exercise book I keep beside my bed, or stagger out to the computer and type it up. If it's a scene from my current novel, I'll head for the computer, but if comes out of the blue, I usually use the notebook.

I always write it down, because if I let myself drift off to sleep, I know I'll forget it. I've learned that the hard way, waking in the morning, remembering that I'd thought of a really good scene, but with no memory of what it was, except that it was The Best Idea Evah!

So I have a stack of notebooks filled with scribbled down scenes, fragments of ideas, thoughts, possibilities and questions. Most don't make it to a book, but there are some scenes that are so vivid and real, they stay in my head and nag at me. I keep thinking about them and asking myself questions — who are these people, what's this story about? What led to this? Where do they go from here?

These are the scenes that spark books. Some times it turns out to be the black moment that comes at the end of the book (eg Gallant Waif — my first book, the ballroom scene), and sometimes it's the first meeting of the hero and heroine (Perfect Rake — the scene here is almost identical to the scribbled down dawn version in the notebook. My latest book, BRIDE BY MISTAKE also started in this way, with a scene coming to me out of the blue.

A young officer is riding through the mountains of Spain. He hears a scream, high, desperate and female. Being a hero, he rides to the rescue. A young girl is being attacked. There's a short, brutal fight. My hero wins.

The girl is thirteen and fleeing a forced marriage. She's alone and vulnerable and she's the same age as his little sister.

So what does he do?


Reader, he marries her.  He's not expecting to survive the war, and thinks if he does, he'll get the marriage annulled. He places her in a convent in the care of her aunt, and rides away to war. So it's a convenient marriage story.
It took me a while to work out the rest of the story, what happens next, and eventually I realized this might have been the start of their story, but it wasn't the opening of the book. It was backstory.
The book starts eight years later, and Luke is back from the war, a changed man. He's now Lord Ripton and under pressure to marry and beget an heir. The annulment has been refused and now Luke must journey back to Spain, to the place of his worst memories, and collect the wife he hardly knows and doesn't want. Now it's an inconvenient marriage story. At least, Luke reflects, being convent educated, his wife will be dutiful and obedient.

For years Isabella, my heroine, lived in the convent, dreaming of Luke — tall, dark and beautiful as an archangel — but by the time the story starts, those dreams have withered on the vine. She's no longer waiting for her prince: she's decided to take control of her own life. Here's a short excerpt:

"I'm leaving the convent." Bella's announcement was followed by a stunned silence.
"Is he comi—" Paloma began.
"Nobody is coming for me, Paloma." Bella glanced at Sister Beatriz, who was still asleep, and said in a lowered voice. "I'm leaving anyway."
"I don't believe you. What will you do? How will you support yourself? Who will protect you? It's dangerous—"
"I will support myself, " Bella said. "And I will protect myself. I won't stay here, waiting forever for someone to rescue me. Life isn't a fairy-tale."
"Isabella Ripton," said a voice from the doorway.
All the girls jumped guiltily.
"Isabella," Sister Josefina repeated as she entered the door. She was the youngest and prettiest of the nuns, merry and lively and dedicated to her vocation. "Tidy yourself. Reverend Mother wants you in her office. You have a visitor!"
"A visitor? Who?" In eight years, Bella had never had a visitor.
Sister Josefina smiled. "Can't you guess?"
Mystified, Bella shook her head.
"An Englishman."
Bella froze.
Sister Josefina nodded. "Tall, dark, and as beautiful as an archangel."
Bella couldn't move a muscle. She couldn't utter a word or marshall a single coherent thought.
"A very stern, very masculine archangel." Sister Josefina sighed. And a blush rose on her cheeks.


* * * * *
Bella is brave and passionate and loyal and unpredictable and she leads Luke a right merry dance. She's also exactly what he needs.  I loved writing this book and I hope you enjoy Luke and Bella's romance as much as I did.

Do you enjoy convenient marriage stories as much as I do? What are some of your favorites? Leave a comment and you'll be in the draw for a copy of BRIDE BY MISTAKE.

Thank you so much for having me on the Romance Dish.

Thanks, Anne! I've loved the Devil Riders series and can't wait to start BRIDE BY MISTAKE!