Guest Review - - When a Scot Loves a Lady 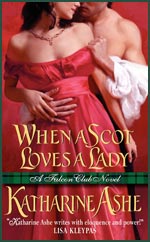 Lady Katherine Savege—her very name meant scandal in the narrow world of London’s aristocrats, and her every act only served to keep her a favorite topic of the gossips and see those who accepted her grow fewer. But Kitty was determined to have her revenge on the man who destroyed her innocence, regardless of the cost. Then one night at a masquerade the dark gaze of an uncouth Scottish earl penetrated the layers of disguise and changed her life. She gave up her pursuit of vengeance on Lambert Poole, only to stir up all the old gossip two and a half years later when Poole threatened her brother and Kitty took proof of the reprobate’s treasonous activities to the authorities. When Lady Emily Vale, one of her few remaining friends, invites her to Shropshire for Christmas, Kitty gratefully accepts the invitation.

On the night Leam, Earl of Blackwood met Lady Kitty Savege, he was on Falcon Club business, quietly retrieving the missing niece of a bishop. Now, after five years of Falcon Club missions, he is finished. This time when he goes to Alvamoor, his estate in Scotland, to spend Christmas with his son, he plans to stay. But first he has promised to perform one final task for the Falcon Club.

Three years after their first meeting, a meeting neither has forgotten, Kitty and Leam with their respective companions take refuge in the same inn during a blizzard. As the weather conditions worsen, the small company find themselves sharing the Christmas season in a country inn. It’s ample time for the attraction between the two to build, time for dogs and mice and sexy card games and stolen kisses and more. But even in the countryside of Shropshire, enemies pursue them. Kitty is shot, secrets go unrevealed, and love seems destined to be enjoyed only for a season.

This first book in Ashe’s Falcon Club series introduces an intriguing cast of characters and a story that weaves together plot threads that twine together the public and private lives of the characters. Leam says to Kitty at their first meeting, “But things be not always whit thay seem.”  That sentence, which Kitty repeats to herself later, becomes thematic. Neither Kitty nor Leam is the person he/she seems to be, and the same holds true for nearly all the secondary characters as well . While all the secrets and miscues make for an interesting, lively paced story, they can also confuse the reader. I like the Kitty of the village inn, but I never felt I fully understood who she was before Shropshire. There were all these pieces of the puzzle in front of me, but I could never piece them together in a fully satisfactory manner. I wondered if I should have read Captured by a Rogue Lord first.

I was fascinated by Leam from his first appearance, and my fascination increased when I read this description:

Four years at Cambridge. Three years after that at Edinburgh. He spoke seven languages, read two more, had traveled three continents, owned a vast Lowlands estate, was heir to a dukedom possessed of a fortune built on East Indian silks and tea. Yet society imagined him a ruffian and a tease. Because that was the man he showed to the world.

Small wonder I was fascinated. The more I learned about him, the more engaging I found him. Yet Leam also irritated me beyond words. I hated his use of dialect. Other readers may not be bothered by these moments at all. In fact, for those enamored of heroic Scots, his language may even add to his attraction. But I was pulled out of the story every time he spoke in dialect.

Despite these issues, I found the story compelling and the characters interesting, and the next two Falcon Club books, How to Be a Proper Lady (June 26) and How a Spy Loves a Lady (September 25) are on my TBB list. If you like adventurous romances with a high sizzle factor and settings that are not limited to London scenes, I recommend When a Scot Loves a Lady. And about those stars . . . I’ll raise them to 3.75, and if you don’t mind the “weels” and “dinnas,” you’ll probably be more generous.

Posted by pjpuppymom at 7:08 AM