Review - - A Week to Be Wicked 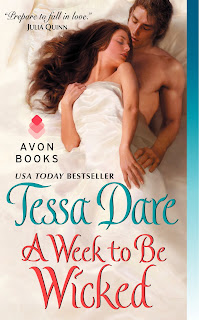 Before I ever reached the first word of this story, Tessa Dare had already hooked me with this one line dedication:


For all the girls who walk and read at the same time.

I mean, really, who among us cannot relate to that?

For one of those girls, studious Minerva Highwood, the past year in Spindle Cove has been the best of her life.  Away from the censorious eyes of the ton and with her mother's focus on marrying off eldest daughter, Diana, Minerva has been free to explore the surrounding countryside and indulge her passion for geology.  Life has been good until she hears whispers that Viscount Payne plans to ask for Diana's hand in marriage. Minerva loves her sweet, kindhearted sister too much to allow her to be tied to that womanizing wastrel.  And she refuses to acknowledge those other feelings that thinking of her sister and Payne together cause in the pit of her stomach...or in the region of her heart. The only course of action for a forward thinking lady like Minerva is to beard the dragon in his lair and offer him an incentive he can't refuse to stay away from her sister.

Colin Sandhurst, Viscount Payne, sorely misses the pleasures of life in London but he's stuck in Spindle Cove until his next birthday when his fortune will finally be released to him.  Until his birthday or marriage (an institution he's determined to steer clear of), his funds are controlled by his cousin, Bram who's determined to bring Colin around to the realization that it's time to grow up and embrace responsibility. But then, that quirky Highwood girl appears at his door late one night with an intriguing proposition: pretend to elope to Edinburgh with her so she can make a presentation to the Royal Geological Society about a groundbreaking discovery she's made and she'll give him the substantial prize money.  In exchange, he must promise to stay away from her sister.  Though most view him as a rake at best and scoundrel at worst, Colin has rules by which he lives his life and one of the most important is that he refuses to be responsible for ruining the reputation of an innocent.  He declines her offer yet somehow finds himself going along with it in the light of day.  Minerva has that effect on him.

The seven day trip to Edinburgh proves to be a revelation for both Minerva and Colin, as they bring out both the worst and the best in one another.  Strengths, vulnerabilities and talents previously hidden from public view are all revealed in the course of adventures that await them on the journey.  Layers are expertly peeled away until only the raw truth at the core of their souls remains and a love for the ages awaits.

"And it occurred to her, as she made that mad dash down the lane - clutching a blazing hot pistol in one hand and a fistful of money in the other - that this surely must mark some turning point in her life.  Really, there was no going back from this.

Today, all her mother's judgments had been proved false.  She wasn't plain, but pretty.  She wasn't distracted and awkward, but confident and a crack shot.

Most of all, Minerva was not hopeless.  She had twenty pounds.  She had an important scientific discovery.

And she had Colin, the most handsome, charming devil in England, coming fast on her heels.  Save for the ransom-minded highwaymen and angry magistrate's son chasing after them...

Life had never been so good."

Can I just say how much I adore Colin?  Adore him!   I would love him for this scene alone were there not so many other equally wonderful scenes in this book that further cement my feelings.   He pushes Minerva beyond self-imposed boundaries, tempts her, believes in her, causes her to open her eyes to the wonderful woman she is and helps her discover the confidence to finally ask for what she most wants.  But, for me, what I love most is the sheer joy of life that he teaches her to embrace.

And what Minerva does for Colin... It broke my heart and healed it in the same breath when he finally shares his deepest secret, the heart wrenching experience that has haunted him and molded him since he was a child, that he has never shared with another soul, and Minerva instinctively understands exactly what he needs.

"She couldn't "heal" him.  No woman could.  Events that far in the past just couldn't be undone.  But perhaps he didn't need a cure, but...a lens.  Someone who accepted him for the imperfect person he was, and then helped him to see the world clear.  Like spectacles did for her."

The following is a quote from my 2009 review of Tessa Dare's debut book, Goddess of the Hunt:

Every year there seems to be one debut author who bursts upon the scene and absolutely knocks my socks off with her superb writing skill.  This year, that author is Tessa Dare.  In her debut book, Goddess of the Hunt, Dare showcases her command of the English language with exquisite prose that sings across the pages with a lyrical quality that is a joy to read.  Her characters are so vividly drawn that they practically leap from the pages and her story unerringly hits all the right notes.

That one paragraph could apply to every book that Tessa Dare has written but none more so than A Week to Be Wicked.  In Colin and Minerva's book, not only does Ms. Dare hit all the right notes, she creates new ones.  In a story that flows like fine wine, she brings us two characters that light up the pages with humor, passion and a romance that had my heart singing with joy.  They made me laugh, made me sigh, brought me to tears and continue to draw me back to them weeks after first reading their story.  Every book Tessa Dare has written sits on my keeper shelf.  I love them all but none has touched me as deeply as this one.

Don't miss A Week to Be Wicked.  It has my highest recommendation!

Note:  A Week to Be Wicked is the second book in Ms. Dare's Spindle Cove series.  It stands well on its own but for a better understanding of the characters and maximum reading pleasure, I recommend reading A Night to Surrender first, followed by A Week to Be Wicked.