Guest Review - - At Your Pleasure 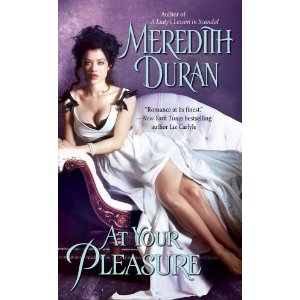 Nora, the widowed Marchioness of Towe, returned to Hodderby, her family home, after the death of her husband. Her father had his title and most of his properties stripped from him when the Whigs came to power in the wake of a Hanoverian monarchy and is in exile in France, part of the court of the Pretender. Hodderby alone was left to her brother David, but he too is now in France, leaving Nora without defenders in a house where enough gunpowder to blow up the house lies concealed beneath wine barrels in the cellar. This is the situation when word comes, as Nora is preparing for bed, that the King’s riders have been sighted, led by Adrian Ferrers, Earl of Rivenham.

The Earl of Rivenham, advisor to the King, is a very different man from the youthful Adrian Ferrers whom Nora once loved. A convert to the Church of England in order to shield his Catholic family, he has lost his faith in the religion of his ancestors and he has none in the religion of England to replace it. Hardened by experience, he is governed by prudence and expedience and will not jeopardize his family, his lands, and his title for the sake of an old love and her foolish brother, who was once his friend.

Adrian, who knows that David Colville is on his way home from France, has a Writ of Parliament that allows him to command the hospitality of Hodderby for himself and his men, search the house at will, and wait for David to show up so that he can be captured and delivered to the Tower, thereby circumventing those who have not forgotten Rivenham’s Catholic origins and are eager to see him fall from power. But the chemistry, and perhaps rarer, the camaraderie that once characterized the relationship between Nora and Adrian keeps resurfacing. As they are drawn together by inclination and by mutual enemies, old secrets are revealed and Adrian finds himself once again falling in love with a woman whom reason warns can destroy him and all that he has devoted himself to protecting.

Meredith Duran is quite simply one of the best writers I’ve read. Her characterization is superb, her plots compelling, and her prose lucid and powerful. She also offers her readers the gift of difference in a genre more accustomed to sameness. Duran sets At Your Pleasure in England in 1715, the year after the coronation of George I. The possibility of a Jacobite rebellion was real; some scholars believe it was a more serious threat that the rebellion of 1745. Most readers of historical romance fiction are familiar with the rudiments of the latter rebellion, having encountered references to Bonnie Prince Charlie, the Battle of Culloden, and Cumberland’s brutal suppression in novels from Georgette Heyer’s The Masqueraders to those by Veryan, Gabaldon, Canham, and countless others. The political climate of England in 1715 when Catholics, including Catholic aristocrats, were denied the right to worship, to vote, to be educated is less familiar. Duran captures the realities of the period without slamming her readers in the face with a history book. And she combines historical accuracy with emotionally credible actions and reactions. Nora and David appear to be lovers for whom a happy ending is impossible. Duran makes the reader fear for them, root for them, and rejoice when the HEA is achieved. If you like your romances intense, dark, emotional, and romantic in the truest sense, you will not want to miss At Your Pleasure.