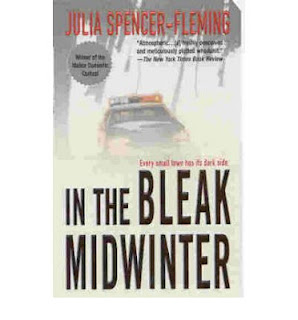 I love the way being part of the online romance community, including the Romance Dishes, has enriched my reading choices. I couldn't tell you how many books I've picked up and adored, thanks to a recommendation from someone whose judgement I trust who mentioned an author on a blog or a Facebook post. And often they're books I wouldn't have discovered on my own.

So long live the Internet community!

I've gone through stages in my life where I've read a lot of mysteries - I particularly remember a Dorothy L. Sayers craze and a P.D. James craze. But over recent years, I'd lost contact with mystery fiction, so it's been a joy picking up a whole new (pretty much after all this time!) genre, thanks to my social media friends. 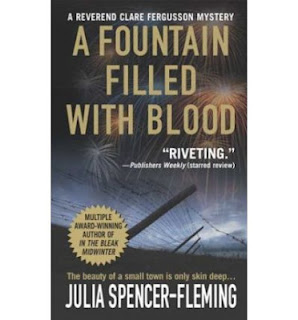 As you'll know if you've been following my reviews here, I've become a devotee of a whole string of wonderful series, including the Amelia Peabody series by Elizabeth Peters, the Maisie Dobbs series by Jacqueline Winspear and the Daisy Dalrymple series by Carola Dunn. My latest craze, which also includes a wonderful forbidden love romance (and we know how that builds sexual tension, just ask Tristan and Isolde!), was thanks to a recommendation from Janga here with the Dishes.

Julia Spencer-Fleming has written six Clare Fergusson and Russ Van Alstyne mysteries set in the very chilly Adirondacks town Millers Kill. The name isn't quite as creepy as it sounds; apparently 'kill' is an old Dutch word for creek. Although I'm sure 'kill' making us think of 'murder' is quite deliberate. I'm currently halfway through the fifth book ALL MORTAL FLESH and loving every word. 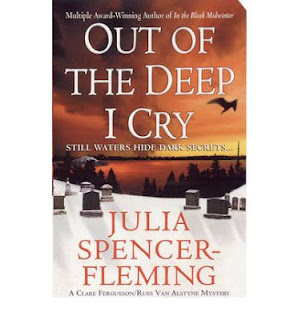 So I thought today, I'd share my thoughts on the first four books in this wonderful series.

The first book, IN THE BLEAK MIDWINTER, introduces intrepid, occasionally reckless, but always interesting Episcopalian priest Clare Fergusson as she begins her first placement as a minister at St. Alban's Church. Poor Clare! She's freezing cold, she's viewed with suspicion by many of her conservative congregation, and she discovers an abandoned baby at the church door. Clare is a former military helicopter pilot, so clearly she's no wuss, but life in supposedly peaceful Millers Kill isn't the rural idyll she expected.

As the mystery of the baby's identity deepens, Clare finds herself flung into the company of attractive but very married police chief, Russ Van Alstyne. Yup, there's the forbidden love. Both Clare and Russ are principled people and have no intention of acting on their passion, but yanno, that can be really tough when they're so often together and passion is kinda irresistible. The sexual tension as these two people clearly made for each other deny their urges really ramps up the emotional content. I think through these books, the romantic arc is at least as important as the mystery elements. 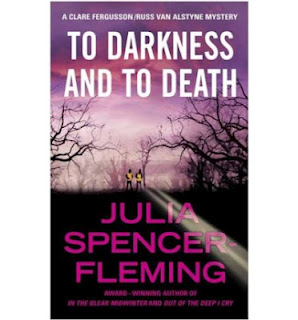 In the second book, A FOUNTAIN FILLED WITH BLOOD, a spate of murders of gay men arouses suspicion that Millers Kill is the site of a hate crime spree. But is it? And how do these killings relate to the building of a swish new spa on the outskirts of town? It was great to see Clare show off her helicopter skills in this story - she really is a great heroine, strong and resilient and with a wonderfully dry sense of humor that endears her to the reader. The other thing I really like about Clare is that while she's a priest, she's never preachy.

The third book, OUT OF THE DEEP I CRY, would probably be my favorite in the series so far. Part of that could be that in this book, the story ranges across different time periods, between the Prohibition 20s, the 1950s and the present day. Anyone who's read my reviews knows I'm a sucker for a historical mystery! When the doctor who runs Millers Kill's free clinic disappears, long-buried secrets and scandals raise their heads to threaten the living. The writing in all these books is astonishingly good but in this one, there's an added emotional depth that just hits this particularly story out of the park, at least for me. I dare you not to shed a few tears when you're reading OUT OF THE DEEP I CRY.

The fourth book, TO DARKNESS AND TO DEATH, turns into a tragedy of errors all set during one day (brilliantly handled in terms of unity of time) when an eco-activist heiress goes missing just before she signs her family property over to the local wilderness society. The plotting in this one is amazingly clever and intricate - you really have no idea where it's all going to end up!

So why would I recommend these books to any reader, romance or not? Firstly, the wonderful characters. It's not just Clare and Russ. Everyone we meet in the pages, from Ross's dotty but lovable mother to pompous powers within the church to the occasionally eccentric locals, is beautifully delineated and comes alive in the reader's mind. The great, galloping stories so you keep the light on till late at night to see what happens. The vivid atmosphere of this small, isolated town where winter comes down so hard, it can kill you. The passion that grows between Russ and Clare, despite their efforts to do the right thing. All round, these books are fabulous reads! Give them a go!

So what's the last great series book you read? What do you think gives a series legs so that readers keep coming back again and again for a fix of their favorite characters and places?
Posted by Anna Campbell at 12:02 AM

Email ThisBlogThis!Share to TwitterShare to FacebookShare to Pinterest
Labels: Julia Spencer-Fleming; Anna Campbell; Second Helping; In the Bleak Midwinter; A Fountain Filled with Blood; Out of the Deep I Cry; To Darkness and Death; Mysteries; Reviews; Series; Forbidden Love