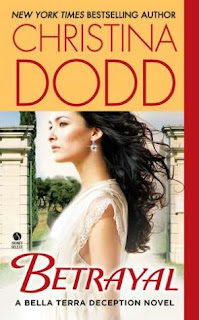 Christina Dodd ratchets up the tension, and the sizzle, in Betrayal, the heart-stopping third book in her sensational Bella Terra Deception romantic suspense series.

BETRAYAL, as with the first two books in the Bella Terra Deception series, showcases Christina Dodd at her very best.  Set in the beautiful California wine country and starring the powerful Di Luca brothers, their beloved grandmother and the women the men come to love, Dodd pulls out all the stops in three riveting, sizzling stories that combine emotionally tormented heroes, strong, spirited heroines, family secrets, stolen diamonds, a priceless bottle of wine and the arrival of danger that threatens to destroy not only the family business but their very lives.  The tension begins in the first book, offering just enough clues to keep me guessing while gradually adding new characters and obstacles to hold my attention along the way.   While each book concludes with a happy ending and resolution of the danger threatening that particular couple, the tension and danger to the entire family caused by the overlying mystery continue to build, escalating to an explosive conclusion in BETRAYAL that had me on the edge of my seat.

Noah Di Luca has a secret, a pretty big one as secrets go, that he's been keeping for nine tortuous years.  While he's lived life to the fullest and carefully maintained a carefree image, guilt has a stranglehold on his soul and love has no place in his life.  To share his love, or the burden of his secret, with anyone else would be placing their lives in danger, a fact that isolates Noah from his family and causes him to walk away from the only woman to ever hold his heart.  But now, in the middle of a deadly family crisis, a crisis Noah believes his naive actions nine years earlier caused, Penelope, the woman who claimed his heart all those years ago has returned to Bella Valley.  All the old feelings are still there but someone from Noah's past, a person he's unable to emotionally separate himself from while at the same time wishing they'd never met, arrives with a demand that carries a deadly consequence should Noah fail to find his grandfather's missing bottle of wine.


Eighteen year old Penelope Alonso loved Noah Di Luca with all of her young heart but at the end of her one summer in Bella Valley, she left with that heart shattered.  Now she's returning, not to see Noah but to hopefully claim the heritage that she's just recently discovered, in the only town that's ever felt like home.   The flame of attraction still burns brightly between them, as do the feelings in their hearts, but will love have a chance to rekindle or will it be shattered by suspicion, betrayal not easily forgotten and the danger that threatens Noah and everyone he holds dear?

I love second chance stories and this one is terrific.  Dodd does an excellent job of balancing suspense and romance, keeping the story flowing and keeping me totally engrossed.  I did not want to put this book down.    In fact, I even went so far as to mute my phone so I wouldn't be interrupted!  Noah and Penelope are both multi-layered characters with substantial life baggage, including the broken trust between them, with which they must come to terms before they are able to move forward with one another.  Dodd does this gradually and realistically, giving us characters to whom we can relate, situations into which we can place ourselves, and villains we'd probably be willing to take out ourselves if we could get our hands on a weapon.

I came to care about these characters and what happens to them - not just the heroes and heroines of these books but all of the Di Lucas, especially Sarah, the matriarch of the Di Luca family. Christina Dodd is exceptionally gifted at creating the complex, flawed characters I love to read about, especially within the framework of a family.  With BETRAYAL and the two books that preceded it, she pulled me right into the hearts of the Di Lucas and they, in turn, touched my every emotion.

For books that will draw you in and not let go until long after you've turned the last page, I highly recommend the Bella Terra Deception series.  The books, in order, are SECRETS OF BELLA TERRA, REVENGE AT BELLA TERRA and BETRAYAL.