Review -- She Tempts the Duke 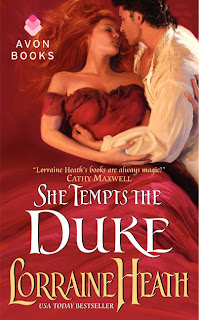 At fourteen years old, losing your father is devastating enough, but Sebastian Easton, the new Duke of Keswick, is absolutely crushed when he finds out his uncle wants Sebastian and his two brothers, Tristan and Rafe, dead. Lord David locks his nephews in the tower of their beloved home, Pembrook. Sebastian knows their minutes are numbered and believes the time is near when he hears footsteps. Help comes in the form of their twelve year old friend, Mary, who lives on the neighboring estate. Mary helps them escape and Sebastian makes her a promise to meet years later and seals it with a kiss. The brothers separate to protect themselves and vow to return one day. Sebastian went abroad as a soldier, Tristan became a sailor and later a captain, while Rafe stayed in the seedy parts of London and now owns a den of vice.

Twelve years later, Sebastian and Tristan finally return to London and reunite with Rafe. They make their first appearance together in society at their uncle’s party where they cause quite a stir. Lord David is shocked and angry as he has been petitioning to obtain the dukedom for some time. Lady Mary is in attendance and is overjoyed that her childhood friends are back. She speaks up for the brothers, her dearest and oldest friends, when no one else will. Mary, herself, had only recently returned to society after being sent to a nunnery for her own protection after she confessed to her father of Lord David’s evil intentions towards Sebastian and his brothers all those years ago. Shortly after her homecoming, she was proposed to by Lord Fitzwilliam, a future marquess, and accepted. Now she is torn between her commitment to her fiancé and her reemerging feelings towards her childhood friend and love.

She Tempts the Duke is a good read, though isn’t among my favorites by Lorraine Heath. I thoroughly enjoyed the interactions between Sebastian and his brothers and also between him and Mary. When Sebastian and Mary see each other after twelve years, the emotion and passion was strong and palpable, which is typical of a Heath book. I admired the way she bucked decorum and stood up for Sebastian in front of everyone.

Mary did so much for him and I totally felt Sebastian’s sentiment throughout the first two-thirds of the book. Their romance, subtle as it was, was progressing and moving along so well. She didn’t care that Sebastian was so badly scarred and wished that he could see himself the way she sees him. By the last third of the book, I didn’t feel it quite as much. I’m not sure if it was just me, but I wanted to yell at Sebastian a time or two. I understood his wanting revenge—after all, his uncle wanted him dead—but he couldn’t seem to budge an inch from the past and try move on. He was so wrapped up in vengeance and getting back his beloved Pembrook that he couldn’t see what was right in front of him—Mary and her shining love. Then, Mary did something so silly and clichéd right at the end, I shook my head. These issues are the reason for 3.5 stars. That being said, this will certainly not keep me from picking up the next book by Heath. I have been a long-time fan of her work and many of her books are on my keeper shelves. I recommend this one, but with a caveat.