Review -- Between the Duke and the Deep Blue Sea 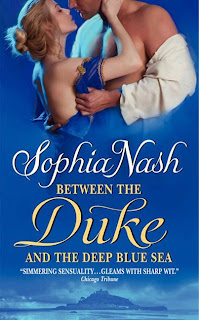 Touted as the Hangover in Regency England, Sophia Nash’s first book in her new Royal Entourage series, Between the Duke and the Deep Blue Sea, is a spectacular historical romance that delighted me from the first page to the last!

The morning following a Royal Entourage party thrown by the Prince Regent, Alexander Barclay, ninth Duke of Kress, wakes up wet and without a clue as to what happened the evening before. After being summoned by His Majesty, Alex learns that the same can be said of the other dukes in attendance...at least the not remembering part. Their exploits are published in the morning paper and the writer goes so far as to state that he can no longer support or make allowances for the monarchy. This of course enrages the Prince Regent. In order to restore the Crown’s good name, he orders the outrageous dukes to repair the social damage by dismissing their mistresses and decadent lifestyles and marry a lady of impeccable reputation. Alex is the first selected since he supplied the drinks for the party. He is sent away to his principal seat in Cornwall, St. Michael’s Mount, and instructed to make repairs to the estate and prepare for a bevy of guests, including several prospective brides. This doesn’t sit well with Alex as he abhors country life, but he knows he has no choice. On his way there, he finds a woman clinging to the side of a cliff.

Roxanne Vanderhaven, Countess of Paxton, slipped off the side of the cliff while she and her husband were looking for her beloved dog. Said husband Lawrence, Earl of Paxton, told Roxanne that he would go get help and be back as soon as he can. After a long, long while, Roxanne realizes two things: 1.) help is not on the way, and 2.) her husband has left her there to die. The Duke of Kress, whose estate is twenty miles further up the road, finds her (thanks to Eddie, her dog) and saves her life. When Roxanne tells Alex what happened, including her husband’s part in it, she is amazed that he instantly believes her. Alex takes her to the Mount under the guise of a distant cousin until she can figure out why Lawrence would want her dead. Alex agrees to help Roxanne discover the truth and he enlists her assistance in helping him choose a bride. But the only woman who appeals to him is already married. Oh, and dead.

Between the Duke and the Deep Blue Sea is a lighthearted and refreshing story that I could not put down! Ms. Nash is the queen of witty dialogue—of which I am a fan—and this one has it in abundance. I loved watching Roxanne “come alive” while at the Mount. For years she had been kept sheltered by her indifferent husband and was a dutiful wife, which is why she can’t understand why he wanted her dead. At the Mount, she is free to be herself around Alex.

It felt so right...to be able to speak her mind. Not to hold back. Not to put on airs or walk on eggshells. No matter what she said to this man, he never became angry or sullen, or disagreeable. And he didn’t lie to her. At least she hoped he did not. More to the point, he spoke to her as an equal.

Alex likes Roxanne from the moment he first meets her. She’s intrepid, has a sharp sense of humor, and is unlike any woman he’s ever met.

He knew what it was about her. Her courage. Her relative cool-headedness despite her ordeal. Every other female he knew would have at least had a fit of the vapors or clung to him like a flea on a dog. She had pluck, this one. That small, shriveled chivalrous part of him wanted to help her exact justice; but that larger part of him, that wiser and older survivor by-the-skin-of-his-teeth, told him to keep her at arm’s distance.

Boy, does he help her exact justice! With Roxanne’s aid, Alex cleverly torments the poor plant-loving Lawrence and the ensuing antics are laugh-out-loud funny. It was a joy to see Lawrence get what he deserved and to watch Alex become Roxanne’s hero. Doing things for her makes him happier than he’s been in a long time and helps him to appreciate the understated splendor of the Mount.

The Mount was seducing him with its familiar beauty, which jogged long-dormant memories of happiness of a long time ago.

The secondary characters—from Alex’s candid great aunt, Mémé, and the beautiful and outspoken Isabelle, Duchess of March, to all of the other scandalous dukes—rounded out the story perfectly. So much more happens, but I’ll let you read this gem for yourself. For me, it is so full of win and hit all the right buttons. To say I loved it is an understatement. *g*