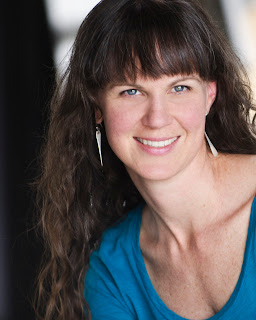 I had the pleasure of meeting Leigh LaValle at the RWA National Conference last year.  She's a warm, friendly, talented woman who just happens to have written a terrific Regency romance that releases today!  Leigh lives in the Pacific Northwest and, as her website bio says, "When I am not writing, mommying, or reading, I am rarely seen cleaning, and more often found hiking or, when I am really lucky, in the white powder of the ski slopes."  (That cleaning comment alone would have made me a fan!)  She's also a yoga instructor, holds an honor's degree in English Literature with a minor in Creative Writing and is a published poet.  Please join me in giving debut author, Leigh LaValle a warm welcome to The Romance Dish! ~PJ

Thank you for having me here at The Romance Dish! I am excited to share my release day with you all. THE RUNAWAY COUNTESS is a book that I will always hold close to my heart. Not only is it my debut novel, it is also inspired by a romance that colors my entire life- my parents' marriage.

My mom was a die-hard Democrat and my dad a card-carrying Republican. This made for many interesting discussions at the dinner table. As the wine flowed, so did the heated opinions. I soon realized that, while my parents might spar over the evening news, they were never actually angry at each other. They agreed to disagree, even if they still argued about it. In other moments, there was much laughter and joy shared between them. Their life was full of sailing and skiing adventures, dinner-and-a-movie nights and enjoying the peace of their garden.

As the US descended into bickering and battle lines during the 2008 presidential elections, I decided I wanted to write a story that demonstrated how two sides of an issue could both be right. I chose the Robin Hood legend as my theme, and the Regency as my backdrop. The hero, the Lord Lieutenant of Nottinghamshire, is a firm believer in the law; rules are meant to be followed. The heroine is an accomplice to the famed highwayman who steals from the rich to give to the poor. As the two spar and cajole and test each other, I tried to show how both sides of the issue have merit, how both characters have sympathetic reasons for their beliefs. And how those on opposing sides could still fall deeply, madly, passionately in love with each other. 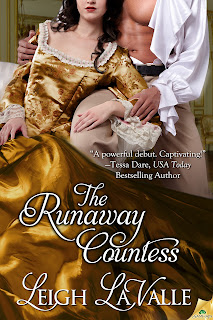 During the time I was writing THE RUNAWAY COUNTESS, my mom was diagnosed with cancer. She, who unwittingly introduced me to romance novels, really wanted to read my book. I printed out copies of the chapters and she read them with a pencil in hand. My early reactions to her critique were typical to any daughter- I was upset, defensive and felt misunderstood. But, after I put aside my pride, I realized my mom had some really good points. Her main comment? She asked me if my heroine had stomach problems. “Her stomach is up, it is down, it is churning. Does she have gastrointestinal issues? Is this part of the plot? Do you think this is a wise choice?” At first I thought my mom was joking. She was not. When I went back and read that early version of my first chapters, I discovered I had used ‘her stomach flipped’ or some such description 17 times. (I’m actually not sure of this number, I have blocked the truth from memory. ;) I still have those pages my mom marked in pencil. I will treasure them always.

My mom did not finish reading my book. She died on March 8, 2010. I think it is a beautiful karma that my release day, far from my control, was set as March 6.

On March 25, 2010 I sat by my phone and awaited a call from RWA. They were announcing the Golden Heart finalists, and I was certain I would be one. I had just buried my mother, I was sick with pneumonia, sick with grief, and felt like life owed me something. I never did get a call that day. I cried through a box of tissues and swore I would never write again. The business was too hard, and life was hard enough. I don’t know what did it—I credit my writing partners and my memories of my mom who had a fighting spirit—but I did sit down at my computer, I did revise those chapters for the hundredth time, and I did final in the Golden Heart in 2011. And I did sell my book.

Even though my mom is not here to celebrate with me today, I feel her everywhere. I know she would be proud of me. She appreciated romance novels and women’s freedom of expression in all realms. While she was in Hospice, I have a strong memory of sitting by her side, holding her hand and reading a light contemporary. Something in the story made me laugh, a sound that echoed in the sorrow and deep mystery surrounding the room. At once, I felt guilty. Perhaps this was not appropriate, perhaps I should not be laughing. But, I decided my mom would appreciate it. She was a woman who knew how to laugh. And the next twenty-three hours of that day would be spent shouldering a grief that was too big for me to bear. For that hour, I held my mom’s hand, and we shared the power of romance novels.  We laughed one last time.

My parents were married almost forty years. In the last year of their time together, they taught me what true romance means. My father, the suit-clad, rule-abiding lawyer laid himself at my mother’s feet and served her with unbounded love. He gave her everything while he still could. And my mom, she passed away moments after my father came into the room and gave her a good-morning kiss. We all know she was waiting for that. Waiting for one last kiss.

As Mazie and Trent step out into the world today, I hope they bring with them the spirit of a romance that can never die. For that is the beauty of story, it lasts forever. And love, it lasts even longer.

How about you, dear reader, has a romance novel saved your day? Has a story surprised you with laughter or tears during one of life’s impossible moments? I’d love to hear your story! One commenter will win a digital copy of THE RUNAWAY COUNTESS.

Her heart longs for justice, but her body clamors for sin.

Once the darling of high society, Mazie Chetwyn knows firsthand how quickly the rich and powerful turn their backs on the less fortunate. Orphaned, penniless and determined to defy their ruthless whims, she joins forces with a local highwayman who steals from the rich to give to the poor.

Then the pawn broker snitches, and Mazie is captured by the Lord Lieutenant of Nottinghamshire. A man who is far too handsome, far too observant…and surely as corrupt as his father once was.

Sensible, rule-driven Trent Carthwick, twelfth Earl of Radford, is certain the threat of the gallows will prompt the villagers’ beloved Angel of Kindness to reveal the highwayman’s identity. But his bewitching captive volunteers nothing—except a sultry, bewildering kiss.

And so the games begin. Trent feints, Mazie parries. He threatens, she pretends nonchalance. He cajoles, she rebuffs. Thwarted at every turn, Trent probes deep into her one vulnerability—her past. There he finds the leverage he needs and a searing truth that challenges all he believes about right and wrong.