No Maybes About It! 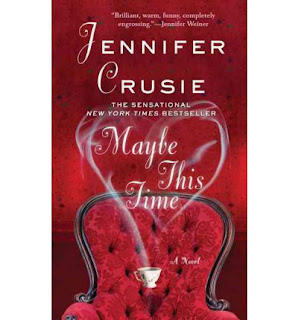 I really need to stop raiding Desire Author Rachel Bailey's bookcases!  She introduced me to the wonderful Three Sisters Island trilogy that formed the subject of last month's Second Helping Review. And now she's given me MAYBE THIS TIME by the fabulous Jennifer Crusie.

I've always had a fondness for ghost stories. If you looked at my bookcase, among all the luscious romances, you'd find a lot of books with titles like CREEPY LONDON GHOST STORIES, THE WORLD'S GREATEST GHOST STORIES, and THE MAMMOTH BOOK OF GHOST ROMANCE.

I've got such a fondness for ghost stories that I recently wrote one (THESE HAUNTED HEARTS). So that's putting my money where my mouth is!

I'm in heaven. Or wandering lost between two planes of existence...

Andie (Andromeda) Miller is the type of heroine who I think Jenny Crusie does better than pretty much anyone else. She's intelligent, she's strong, she's made the hard choices and she lives with the consequences without whining, and she's got a bodaciously smart mouth. The snarky heroine! A JC specialty!

I like snark when it's not spiteful, and Andie is such fun to spend time with. She greets personal adversity, danger and the supernatural with many a one-liner and because she's brave and funny, you're on her side from the start. She's also got her heart in the right place as well as her head. I was completely charmed! Pun intended.

This story is a modern take on Henry James's famous novella THE TURN OF THE SCREW. I read this in first year uni and haven't read it since, so I have to say my recollection on the details is fairly shaky. But from memory, a young governess goes to an isolated house in England where she discovers two seriously creepy children under the influence of even creepier forces. I'm pretty sure it does not end well!

For me, MAYBE THIS TIME also had elements of JANE EYRE. Governess in creepy circumstances? Yup. And things end up better in MAYBE THIS TIME than they do in THE TURN OF THE SCREW, you'll be pleased to hear. Again, JE rather than TTOTS.

Ten years after her divorce from gorgeous lawyer North Archer, Andie agrees to help with two children to whom North acts as guardian. The children live in a creepy castle in the wilds of Ohio (makes sense in context) and so far any attempts to settle them with a governess have failed. Shades of THE SOUND OF MUSIC. North wants to get the kids to the city where they can lead a normal life including school, but every time anyone tries to remove the children from the castle, awful things happen, including death. He has the feeling that Andie's brand of practical common sense might be just the solution to his problem and he bribes her into accepting the job.

So our intrepid heroine, who has finally decided to move on from her youthful passion for North by getting engaged to writer Will Spenser, ventures into the haunted house. There are lots of fun scenes as she wins over the kids - I like those scenes in THE SOUND OF MUSIC too! There are some suitably creepy old retainers. Can't have a ghost story without a sinister housekeeper or two. And there are plenty of scary moments where the ghosts in the house flex their muscles against the positive force that is Andie.

One of the joys of a Jenny Crusie book is the plotting. She has this wonderful ability to build and build and build and then combine everything together into fireworks at the end. MAYBE THIS TIME is no exception.  There are lots of characters and it's a joy watching them interact to the purpose of comic chaos. In a JC book, there's always at least one great comic setpiece. It starts out quietly but the crescendo goes on and on, with more and more characters getting involved, until everything comes to an uproarious ending. The comic setpiece in this one shows Andie ending up as host over a single evening to psychics, TV reporters, Andie's fiance, ghosts, and the man she's never forgotten. I always catch my breath in awe at the beautiful construction of these scenes. Juggling a crowd of people is a pain when you're writing! And Crusie makes it all look so effortless. There's certainly an element of slapstick but it's really clever slapstick. Love it.

I haven't talked much about the hero of this one. Partly because for much of the book, while North is present in spirit (if not quite in the same way as the ghosts!), he's not on the page. He's again a familiar figure from Crusie's output - the gorgeous frat boy who hides hidden complexity and finds himself drawn to the dark side in the form of the snarky heroine. It's pretty clear from the start that he still loves Andie and it's pretty clear that she still loves him. The end of the journey is never in doubt, but the journey is huge fun, with a few scary moments along the way. Comedy and suspense are a difficult mix to bring off right but MAYBE THIS TIME succeeds in spades!